Fitness boost for Ferguson ahead of Fulham trip

Fitness boost for Ferguson ahead of Fulham trip 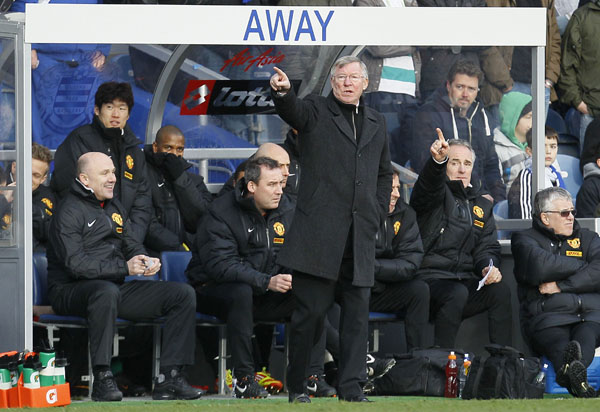 The first half of United’s campaign has been dominated by Ferguson contending with one of the worst injury lists in his 25 years in charge at Old Trafford.

His midfield has been hit badly, with Anderson ruled out for the season with a knee problem, Darren Fletcher being given indefinite leave as he looks to overcome a chronic bowel condition and Tom Cleverley currently missing with an ankle injury.

At the back, Nemanja Vidic has also been ruled out of the rest of the campaign with a knee problem, while Rafael will step up his return from a shoulder injury with a run out for the reserves.

But Ferguson, who is also without Michael Owen, was buoyed by forwards Javier Hernandez and Dimitar Berbatov returning to his team’s lineup for the 2-0 victory at QPR last weekend.

Ferguson has fended off suggestions he should look to add to his squad in January due to the high number of absentees, and he thinks the worst of his problems have come to an end.

“The injuries are improving a bit,” Ferguson said. “It’s getting a little bit better.

“It’s good to have those two players [Berbatov and Hernandez] back, and Rafa’s training now, he maybe just needs a reserve game.

“Obviously, we’d still like to have Anderson and Cleverley back, and a couple of others, but mainly we’re pleased with what we’ve got at the moment.”

Reigning champion United has forced is way back into the Premier League title race over the past few weeks and trails leader Manchester City, who hosted Stoke on Wednesday, by just two points.

United also boasts the only unbeaten away record in the top four divisions of English football, with six victories and two draws on their league travels.

Ferguson’s men have also tightened up their defense following the 6-1 defeat by City in October, and they have managed five clean sheets in the seven Premier League matches since.

Northern Ireland international center back Jonny Evans, who has replaced Vidic in the side, thinks United’s current defensive strength has given the team a major advantage.

“A clean sheet is all you can ask for as a defender,” Evans said.

“It doesn’t matter how you play, if you get a clean sheet you’re happy.

“It really helps when the team is working really hard around you as well. The front players and the wide men work hard to make things a lot easier for you.”

The Costa Rican has played the full 90 minutes in Fulham’s last three matches and scored his first goal at Craven Cottage in the 2-0 victory over Bolton last weekend.