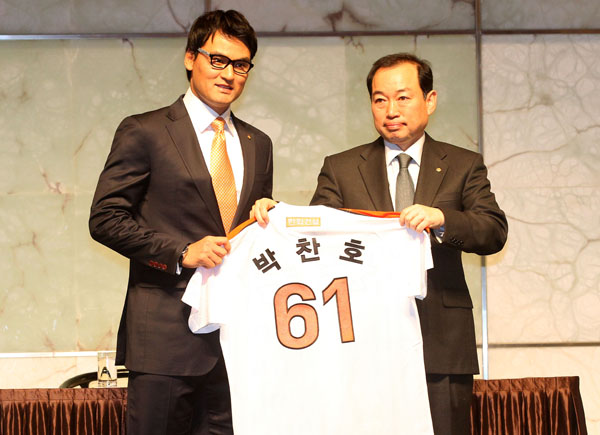 Former Major League Baseball All-Star pitcher Park Chan-ho joined the Daejeon Hanwha Eagles of the Korea Baseball Organization yesterday, signing an agreement that will see all his earnings donated toward the development of amateur baseball in Korea.

Park confirmed he has signed a one-year contract worth 24 million won ($ 20,547) - the smallest salary the KBO guarantees for rookies - while the Eagles will in return donate an additional 600 million won. The pitcher has earned a total of $85 million during his 17-year MLB career.

The signing occurred one day after Park gave the Eagles carte blanche on his contract during their first meeting.

Park, 38, said money isn’t why he has decided to play in his home country. “It’s important that I pitch and bring enjoyment to the fans, but I have to do more than that,” Park said. “For the development of youth baseball, I entrust my salary to the Eagles, and together we want to do something worthy for children.”

Park especially emphasized that Korean baseball’s infrastructure should be further developed to produce top-quality players and foster a talented and sustainable league.

Last week, Park, who was released from the Japanese club Orix Buffaloes in October, was cleared to join the KBO for next season after the league exempted him from its written foreign-player procedure.

Park, who signed with the Los Angeles Dodgers in 1994 after graduating from Hanyang University, has not played in the KBO. He was the only active player to whom the rule applied.

“I want to thank the KBO and all the other eight clubs’ officials for enabling me to play in Korea,” Park said. “I always wanted to play baseball with Korean players in front of Korean fans, and this is the day that my wish comes true.”

Park also thanked the Eagles officials for greeting him with hospitality. In the press conference, Eagles CEO Jeong Seung-jin, general manager Noh Jae-deok, manager Han Dae-hwa and three players, including Kim Tae-kyun, who recently became the highest-paid professional sports players in Korea with a salary of 1.5 billion won, were there to welcome the Major Leaguer’s home.

Park will be wearing a uniform with his trademark No. 61, a number he kept during his entire Major League career.

“When I heard that 61 is the most popular number for young players, I even felt responsible,” Park said. “It also gives me confidence and a positive mind since my young colleagues are here.”

Park is the first Korean to play in MLB. In fact, the right-handed pitcher collected 124 wins, the most ever by any Asian pitcher. He signed with the Buffaloes early this year and had a disappointing season as injuries threw off his performance. He went 1-5 with a 4.29 ERA in just seven games in Nippon Professional Baseball.

“The back injury that bothered me in Japan has been cured,” Park said. “I want to prepare thoroughly and perform well.”

Park acknowledged that Korean baseball is not familiar to him, but he said he will try his best to adjust to the league quickly. The veteran pitcher said he will communicate with teammates to help his club to play in the postseason.

“Of course there could be an ordeal in the future, but this is another opportunity for me to play ‘matured’ baseball,” Park said. “If I can focus on what I can control, I can do anything.”