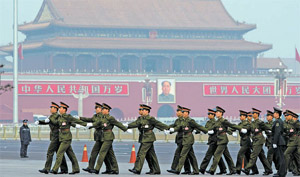 BEIJING - China moved with rapid speed to offer condolences to North Korea over the loss of its leader and show support for new leader Kim Jong-un, fueling worries that the emerging giant will try to expand its influence over its communist ally.

Yesterday, Chinese President Hu Jintao visited the North Korean Embassy in Beijing to offer condolences on the death of Kim Jong-il, a day after Chinese government agencies, including the ruling Communist Party’s Central Committee, quickly approved his son Jong-un as the new leader.

Kim Heung-kyu, a Sungshin Women’s University professor and an expert on China, said there is sufficient reason to believe that China’s quick moves reflect a contingency plan drafted in advance.

“Unlike previous occasions in which it responded cautiously and slowly to an emergency situation, China’s responses after the announcement of Kim’s death felt swift and even bold.”

Kim Heung-kyu said China’s quick proclamation of support for the Kim Jong-un regime contains a calculated message to Washington, Seoul and Tokyo that they should not provoke the North in a time of emergency.

China, which fought for North Korea during the 1950-53 Korean War, has long been the North’s closest ally, but it has expanded its influence in recent years as the impoverished North sought increasing aid and investment. Kim Jong-il visited China four times in 15 months through August.

It called on China to quickly send high-ranking officials to North Korea to communicate with the new North Korean leadership.

Analysts said that China has long prepared for an emergency in the North through increasing intelligence activities, with some saying China may have noticed an emergency situation unfolding in the North as far back as two months ago when North Korea’s leading anchorwoman Ri Chun-hee disappeared from television. Ri returned to the airwaves to announce Kim’s death on state-run television Monday.