Parsing between the lines of succession

Parsing between the lines of succession 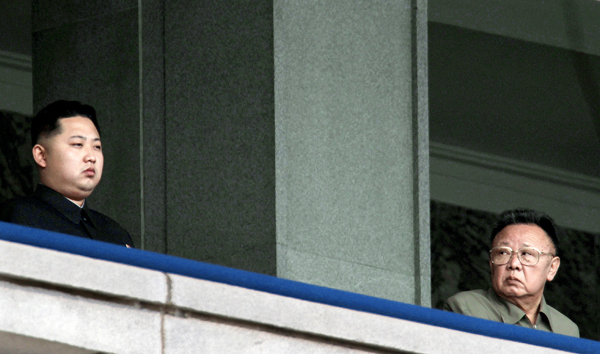 North Koreans flock to Pyongyang landmarks on Monday to mourn Kim Jong-il, with many crying uncontrollably and flailing their arms in grief. [AP/YONHAP]

Kim Jong-il’s son, Kim Jong-un, made his debut as the country’s new leader yesterday, paying his respects at his father’s glass coffin in an official broadcast promoting his will to follow in his father’s ideological footsteps.

Speculation is rising in the South that Jong-un will officially take power after a three-year mourning period, as his father did after Kim Il Sung died in 1994 before being named secretary general of the Workers’ Party in 1997.

“As successor, Kim Jong-un should be appointed chairman of the National Defense Commission and secretary general of the Workers’ Party,” Jo Dong-ho, a professor of North Korean studies at Ewha Womans University, said in a debate on JTBC.

Chang Dal-joong, a professor of political science at Seoul National University, said, “The transition process for Kim Jong-un will resemble that of his father. With the help of military heavyweights, he will come to control the military.”

However, whether Kim Jong-un will embrace the current aging members of North Korea’s leadership remains as a question.

When Kim Il Sung died in 1994, Jong-il had already taken up key posts in the parliament and military for 20 years since being named heir in 1974. But Jong-un has had just three years to prepare for his new role and lacks the military experience to control the powerful military. He currently has only one official title, vice chairman of the Central Military Commission.

Jong-un also grew up in a different background from his father. While Jong-il dealt with his mother’s death, the Korean War and poverty in his youth, Jong-un grew up wealthy, attending an international school in Switzerland. While Jong-il also survived a power struggle with his half-brother Pyong-il, Jong-un has not, with his half-brother Jong-nam saying that he has no intention of succeeding his father and brother Jong-chol falling out of favor because of supposed health problems.

“The biggest difference between Kim Jong-il and Jong-un is how much respect they have earned from the people,” Song Dae-sung, head of the Sejong Institute, told the JoongAng Ilbo.

One of the most likely scenarios of the post-Kim Jong-il era is a collective leadership system, in which Kim Jong-un is backed by a group of high-ranking military and party officials. South Korean experts say the two figures likely to be prominent in Jong-un’s regime are Kim Kyong-hui, his aunt and member of parliament, and her husband Jang Song-thaek, vice chairman of the National Defense Commission.

A worst-case scenario is a conflict between the country’s hardliners and moderates, triggering a military coup. Some experts have also focused on Jong-un’s half-brother Kim Jong-nam, whose whereabouts are currently unknown. They say that the half-brother once publicly criticized his father’s plan for a third-generation succession and that he could organize a revolt against Jong-un.

But most experts are cautious about the possibility of a coup. “Even if the North Korean military ousts Jong-un with a coup, they don’t have an alternative person or system because North Korean politics is so reclusive,” said Jang Seong-min, head of the World and Northeast Asia Peace Forum. “It’s also hard to expect a civilian uprising to overturn the regime, because most North Koreans don’t have access to mobile devices or computers like protesters in the Middle East and Africa.”