In death, a clueless government

In death, a clueless government 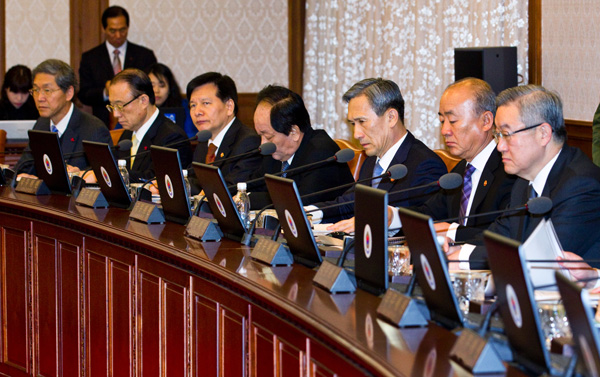 The president was in Kyoto pressing Japan’s prime minister to resolve a long-running dispute over wartime sex slaves. His secretary for national security strategy, meanwhile, was back home getting his appendix out.

Neither apparently knew that Kim Jong-il had died of a heart attack the day before.

On Monday, before North Korea officially announced Kim’s death, the chairman of the Joint Chiefs of Staff was at a base just 600 meters (2,000 feet) from the border on a routine visit. The national defense minister, on the same day, was at the National Assembly, meeting with lawmakers about the defense reform bill. Neither of them knew either.

Even the director of the National Intelligence Service, Won Sei-hoon, admitted to being in the dark. He told lawmakers on the Intelligence Committee in a closed-door meeting yesterday that he first learned of the news from the North’s weepy television announcement. 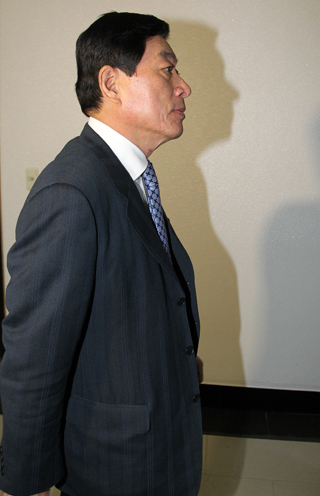 Won Sei-hoon, director of the National Intelligence Service, walks to the Intelligence Committee yesterday, where he was grilled over his agency’s failure to obtain intelligence on Kim Jong-il’s death. [Joint Press Corps]

The government has come under a barrage of bipartisan criticism over its failure to pick up on one of the biggest news to come out of the North - an event that directly affects the security and stability of the peninsula.

Members of the Intelligence Committee grilled Won over his agency’s failure, with the director telling them that Kim’s death on Saturday appeared to have been shared only among a small number in the North’s opaque leadership.

Won pointed out that North Korea had gone ahead with a routine test-firing of short-range missiles on Monday morning before canceling a planned afternoon test after the official announcement was made, according to lawmakers present at the meeting.

Tokyo and Washington were also clueless about Kim’s death, Won said, though Beijing may have known in advance. “China could have found out about it from the announcement, but there are some signs that it knew about it earlier,” Won was quoted as saying.

Meanwhile, Minister of National Defense Kim Kwan-jin, who told lawmakers on the National Defense Committee that he, too, learned of the dictator’s demise from the news, conceded that the government’s intelligence capabilities were lacking.

“Taking into account the peculiar circumstances, including the North’s reclusive nature, it was very difficult to have the information in advance,” Kim said. “Our current surveillance system had limits in detecting the death, and we feel the urgent need to improve and expand our intelligence capabilities.”

Representative Hong Joon-pyo of the Grand National Party called for the NIS and the Ministry of National Defense to accept responsibility for the failure, adding that the government should work more closely with its American allies on sharing intelligence. Hong also said the government must restore its human intelligence operations, which he said collapsed in 1998 after a South Korean agent’s cover was blown and North Korea purged all informants.

Nowhere was the government’s ignorance of Kim Jong-il’s death more publicly apparent than at the Blue House. President Lee Myung-bak returned from his trip to Japan on Sunday, something that would be seemingly unfathomable had officials known about the news from the North. In Lee’s summit meeting with Japanese Prime Minister Yoshihiko Noda on Sunday, neither brought up or discussed the emergency situation in North Korea.

Even major clues in the run-up to the North’s announcement failed to arouse suspicion in the Blue House. On 10 a.m. Monday, North Korea’s state media sent notice that it would air a special broadcast at noon for only the third time in the country’s history. The first time was in 1972 when the historic July 4 joint statement between the two Koreas was announced, and the second in 1994 to announce the death of Kim Il Sung.

In contrast, a defectors’ think tank, North Korea Intellectual Society, posted on its Web site at 11:40 a.m. that day predicting that Kim Jong-il had died.

The organization cited the sorrowful tone and expression of the female anchor who gave the notice for the special broadcast, which it said harkened to the broadcasts leading up to the regime’s 1994 announcement of its founder’s death. It also pointed out that the programs that were airing before the special broadcast were exclusively about the life and achievements of Kim Jong-il.

Yet, back at the Blue House, officials told the media that they believed the special broadcast would be the North’s announcement of its decision to suspend its uranium-based nuclear program in return for aid.

Some lawmakers have called for the resignation of the NIS director. In an interview with CBS Radio, Representative Park Sun-young of the Liberty Forward Party said that, in addition to Won’s resignation, the president should apologize for appointing Won in the first place as head of the country’s intelligence agency.

“Won is from Seoul City Hall,” Park said. “Veteran intelligence officials and North Korea experts were all ruled out, and outsiders were appointed to the intelligence agency.” Won served as Lee’s vice mayor for administrative affairs from 2003 to 2006 when the president was mayor of Seoul.

Park also said the intelligence failure was unacceptable considering that the NIS and the military’s intelligence units are allocated huge budgets each year to collect information on North Korea.

Park’s sentiments were echoed by senior lawmakers from the Democratic Unity Party yesterday at the Foreign Affairs, Trade and Unification Committee yesterday, including Representatives Kim Jin-pyo and Park Young-sun, who criticized the NIS for failing to gather North Korean intelligence despite its generous budget.

“The North is a reclusive country, but it is a serious problem that no one in the South knew,” he said. “The president went to Japan while the defense minister and the chairman of the Joint Chiefs of Staff were just going about their everyday lives.”