Pyongyang deep in mourning after death

Pyongyang deep in mourning after death 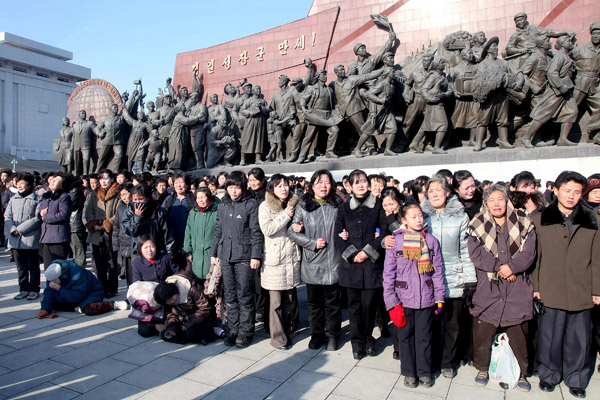 North Koreans flock to Pyongyang landmarks on Monday to mourn Kim Jong-il, with many crying uncontrollably and flailing their arms in grief. [AP/YONHAP]

PYONGYANG - Streams of mourners, some wailing and some grim-faced, placed flowers at monuments around the North Korean capital Tuesday in memory of longtime ruler Kim Jong-il, while state media hailed Kim’s son and successor as a man “born of heaven” - suggesting the transition to a new leadership was firmly on track.

With an 11-day mourning period in effect for Kim, who died Saturday, flags flew at half staff and shops were closed to allow North Koreans to pay their last respects to the “dear leader,” as he was called.

“Today, as well as yesterday, the Korean people have been coming here to Mansu Hill in deep sorrow at the loss of the benevolent father of our nation with the infinite feeling of longing,” said Ri Ho-il, a lecturer at the Korean Revolutionary History Museum. “Our General [Kim Jong-il] is our people’s benevolent father. He defended our people’s happiness, carrying on his forced march both night and day.”

The state funeral is to be held on Dec. 28. North Korean officials say they will not invite foreign delegations and will allow no entertainment during the mourning period.

Kim’s death and the possibility of a power struggle in a country armed with nuclear weapons and known for its unpredictability have heightened tensions in the region.

North Korean state media have given clear indications that Kim’s third son will succeed him.

The Korean Central News Agency on Tuesday described Kim Jong-un as a “a great person born of heaven,” a propaganda term only his father Kim Jong-il and his grandfather Kim Il Sung had enjoyed. The Rodong Sinmun, the newspaper of the ruling Workers’ Party, added in an editorial that Kim Jong-un is “the spiritual pillar and the lighthouse of hope” for the military and the people.

It described the successor as “born of Mount Paektu,” one of Korea’s most cherished sites and Kim Jong-il’s official birthplace. On Monday, the North said in a dispatch that the people and the military “have pledged to uphold the leadership of comrade Kim Jong-un” and called him a “great successor” of the country’s revolutionary philosophy of juche, or self reliance.

But whether the transition would be a smooth one remained an open question. “The situation could become extremely volatile. What the North Korean military does in the next 24-48 hours will be decisive,” said Bill Richardson, former U.S. ambassador to the United Nations who has made several high-profile visits to North Korea.

Kim Jong-il was in power for 17 years after the death of his father, the charismatic founder of North Korea.

His death could set back efforts by the United States and others to get Pyongyang to abandon its nuclear weapons ambitions. It also comes at a sensitive time for North Korea, which is preparing for next year’s 100th anniversary of the birth of Kim Il Sung.

Concerns are high that Kim Jong-un, being young and largely untested, may feel he needs to prove himself by precipitating a crisis or displaying his swagger on the international stage.

Some analysts, however, said Kim’s death was unlikely to plunge the country into chaos because it already was preparing for a transition. Kim Jong-il indicated a year ago that Kim Jong-un would be his successor, putting him in high-ranking posts.

South Korea’s president urged the public to remain calm while his cabinet and the National Assembly convened emergency meetings Tuesday. Unification Minister Yu Woo-ik said his government was refraining from moves that may exasperate North Korea.

The Ministry of National Defense said the South Korean military and the 28,500 U.S. troops stationed in South Korea had bolstered reconnaissance and were sharing intelligence. AP