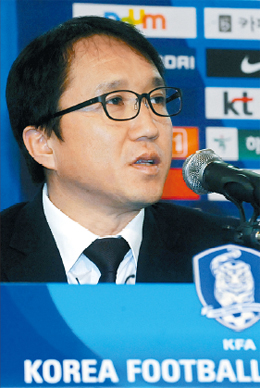 Hwangbo Kwan, head of the technical committee in the Korea Football Association, speaks at the KFA headquarters in Seoul, yesterday. [NEWSIS]

Jeonbuk Hyundai Motors FC’s Choi Kang-hee was named the new skipper of Korean football yesterday, given the task of guiding Korea to the 2014 FIFA World Cup in Brazil.

At its headquarters in Seoul, the Korea Football Association’s technical committee held a meeting to announce that Choi has been chosen as the new national team coach after accepting the offer.

The 52-year-old coach, who led Jeonbuk to this year’s Korea Professional Football League (K-League) championship, will take the job that was previously held by Cho Kwang-rae. Cho was fired two weeks ago after Korea suffered a shocking 2-1 defeat to Lebanon in the third round of the Asian qualifiers for the 2014 FIFA World Cup.

Korea needs at least a draw against Kuwait on Feb. 29 to advance to the final round of the Asian qualifiers. The KFA said it has selected Choi since he can prepare and improve the national team in a short period of time with his experience and leadership. 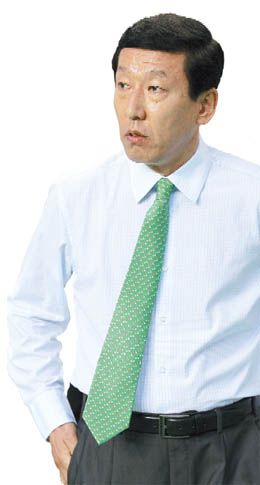 “He has plenty of experience, knows how to motivate players and understands the current situation of Korean football,” said Hwangbo Kwan, head of the technical committee. “At Jeonbuk, he had good results and showed great ability in utilizing players.”

Hwangbo added that although Choi has accepted the job offer, the details of the coaching conditions are not yet determined as he hasn’t signed a contract.

“It’s up to Choi himself to speak with the KFA on whether he will only coach for the Kuwait match or stay on board beyond that,” Hwangbo said. “The technical committee only recommended Choi as a national team coach.”

However, Kim Jin-kook, the CEO of the KFA, later hinted that Choi will be offered a similar salary to Cho’s, and that he will coach until the end of the 2014 FIFA World Cup if the team qualifies.

“It is not right to replace a coach after he leads the team to the World Cup,” Kim said. “He is not going to lead the team just for the Kuwait match.”

Kim said negotiations will begin after Choi held a press conference today. But Kim also noted that it is too early to consider what to do with Choi if Korea loses to Kuwait and fails to qualify for the final round.

Choi, who previously served as the national team assistant coach between 2003 and 2004 under coach Humberto Coelho, was already tabbed as a strong candidate to take over the vacant coaching job since he guided Jeonbuk to the K-League championship and runner-up in the Asian Football Confederation Champions League this year.

But the two-time K-League Coach of the Year winner originally expressed that he wouldn’t take the position, saying he wanted to focus on building Jeonbuk into an elite club.

In addition, the technical committee said last week that it was considering hiring a foreign coach.

Guus Hiddink, the Dutchman who led Korea to the semifinals in the 2002 World Cup, was considered, while former England coach Sven Goran Eriksson of Sweden and the 2002 World Cup winner Luiz Felipe Scolari of Brazil were also thought to be possible candidates. Steve Bruce, the former Sunderland AFC manager, also reportedly showed interest in taking the national team.

However, Hwangbo said yesterday that although it is true that he even contacted and discussed financial deals with some foreign coaches, Choi was never off the radar, insisting the Jeonbuk coach was their first choice.

“I met him three times to persuade him,” Hwangbo said. “It was difficult but Choi decided to devote himself. Jeonbuk also accepted it as helping Korean football in the big picture.”

However, some raise their eyebrows that Hwangbo may have appointed Choi without discussing the issue with other committee members, citing that some committee members didn’t know until yesterday morning that Choi was selected as the new coach.

“There was no special discussion on our first meeting last week,” said one of the technical committee members, who asked his name not be mentioned, in an interview with Ilgan Sports, the JoongAng Ilbo’s daily sports news paper. “I learned that Choi is going to be a coach by looking at media reports.”