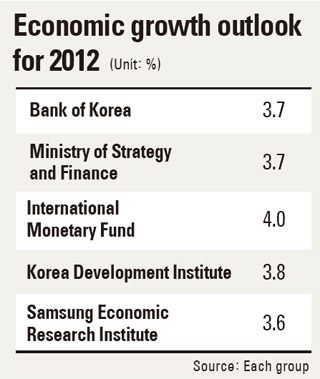 Policy makers yesterday tried to calm local financial markets worried about both external economic uncertainties and the aftermath of the death of North Korea’s leader.

“After news broke out of the sudden death of North Korean leader Kim Jong-il on Monday, the financial markets at home and abroad fluctuated to some extent,” Minister of Strategy and Finance Bahk Jae-wan said yesterday while attending a crisis management meeting with other government officials. “However, the markets are showing signs of regaining stability quickly.”

Bahk also noted that Koreans are not stockpiling food or showing agitation in general.

In the following days, however, the financial market bounced back. On Tuesday, the Kospi jumped 0.91 percent, and the index also got off to a strong start yesterday before closing 3.09 percent higher at 1,848.41 points.

“Though stable, the government will closely monitor market situations and cooperate in better responding to any future developments,” Bahk said.

The ministry has been running 24-hour emergency teams since Monday to respond quickly to potential developments that could raise concerns in the market.

Bank of Korea Governor Kim Choong-soo also said in a separate meeting yesterday that “Uncertainties in the financial markets have grown, but they are strictly different from being ‘hazardous.’

“Uncertainties have grown, as in addition to the euro zone debt crisis, geopolitical risks have grown as well,” Kim said. “But uncertainties should be differentiated from economic danger.”

The governor emphasized that “establishing strong fundamentals is key to stabilization.”

The fast-growing economy of China, however, is being regarded as another emerging challenge for the Korean economy.

“Next year’s economic policy aim for China is to promote development amid stability,” Bahk said, adding that China’s major policy issues are focused on stabilizing the livelihoods of workers and developing the local service industry to boost domestic demand. “China’s policy goals are similar to those of Korea, and this shows that it has caught up with Korea in terms of its economy.”

Bahk said, “There isn’t much time left for Korea to make a leap forward and, as part of the effort, it should focus on more revolutionary policy making.”

The Ministry of Knowledge Economy also announced it will allocate a bigger portion of its budget to research and development for smaller enterprises over the next few years. It will spend 16.5 percent of its R&D budget to support SMEs in 2015, which is higher than last year’s 12 percent.