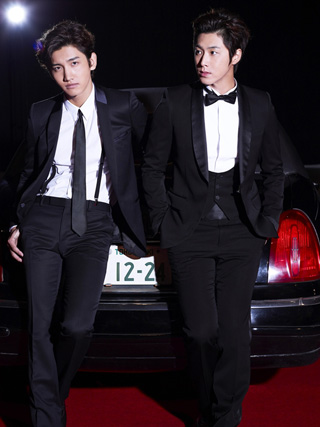 On Nov. 30, the duo released the single “Winter Rose” in Japan.
The single album features sentimental ballads in line with the winter season and comes in two versions either as a CD or a CD and DVD package.

The regular CD version of the album contains the title track “Winter Rose” as well as five additional songs. The CD and DVD package features additional tracks from the band’s last official album, “Tone,” which was released in September. On the DVD are two different versions of the music video to the song “Duet,” as well as behind-the-scenes footage of the music clips.

Of late, the band visited Taiwan on Dec. 10, attracting some 1,000 fans to Taoyuan International Airport. The band was in Taipei to participate in two fan meetings, held on Dec. 11 at the Taipei Show Hall2, which accommodated some 10,000 fans. The band popular throughout Asia will kick off the New Year with a Japanese concert tour from Jan. 18. The concert titled “2012-Tone” will take place in various cities throughout Japan including Yokohama, Nagoya, Fukuoka, Niigata, Sapporo, Hiroshima and Osaka, to name a few.