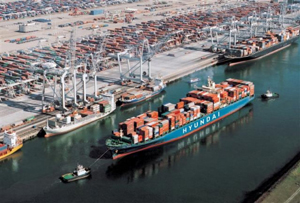 Hyundai Merchant Marine has formed the world’s largest shipping alliance, which will cover the Far East to Europe trade lane, the company announced on Tuesday.

According to the Korea’s No. 2 shipper, the agreement will bring together members of The New World Alliance and Grand Alliance to create The G6 Alliance.

The company said The G6 Alliance, which is scheduled to begin operations before April 2012, will create a network with more than 90 ships, with seven joint services operating between Asia and Europe and two services to the Mediterranean.

“With the launch of The G6 Alliance, we will be able to expand our global vessel network and provide the world’s best service to our clients,” said Hyundai Merchant Marine CEO Lee Suk-hui. “By expanding our vessel network with notable carriers, the company has paved the way to become a global leading carrier.”

As a member of The New World Alliance, Hyundai currently has a joint network that operates 43 ships with six services with routes between Asia and Europe. The G6 Alliance will further enlarge Hyundai’s shipping network, company officials said.

Hyundai added that nine joint services will offer more frequent departures, sailing daily from major Asian, European and Mediterranean ports. The new partnership will also result in broader port coverage, it said. Gdansk in Poland and Gothenburg in Sweden are among the new ports.