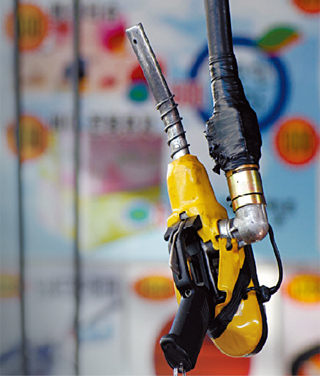 Refiners have once again yielded to pressure by the government to offer cheaper gasoline prices.

Yesterday, Nonghyup and the Ministry of Knowledge Economy announced that GS Caltex and Hyundai Oilbank have been designated to supply oil at a lower price to new altteul (“thrift”) gas stations, which will offer consumers cheaper fuel. The two refiners will supply cut-price gasoline for one year.

The new gas stations are part of a broader government campaign launched at the beginning of the year. Aimed at alleviating the difficult living conditions of a general public facing high inflation, but with a particular focus on lower-income brackets, the government has been pushing local refiners to lower their energy prices.

Nonghyup, a federation of agricultural cooperatives, is the main body overseeing the ministry’s latest gas station plan. It will see Nonghyup and Korea National Oil Corporation purchase large volumes of gasoline from the refiners and supply this to attleul stations. These will then sell gas that is 60 won ($0.05) to 100 won cheaper per liter than existing gas stations.

The two refiners will supply gas to 1,300 alttuel stations that is about 40 won per liter below the current market price. Though the figures were not made public, they reportedly offered this level of discount in the third round of bidding that took place yesterday.

GS Caltex will supply oil to the Jeolla and Gyeongsang regions, while Hyundai Oil Bank will take responsibility for central parts of the country. The first altteul gas station will be launched on Dec. 29 at Mapyeong Gas Station in Yongin, Gyeonggi.

The ministry plans to set up 700 such stations by next year and increase the figure to 1,300 by 2013. NH gas stations will account for the first 300 to change their signboards, and another 167 to switch over are located on expressways run by the Korea Expressway Corporation.

Nonghyup held two previous bids on Nov. 15 and Dec. 8 to select oil suppliers that will provide inexpensive gasoline for the new gas stations. However, the previous bids failed due to price squabbles, as the bidders believed the government was demanding unreasonably large price cuts. In order to wrap up the bidding, it offered two large concessions to bidders. 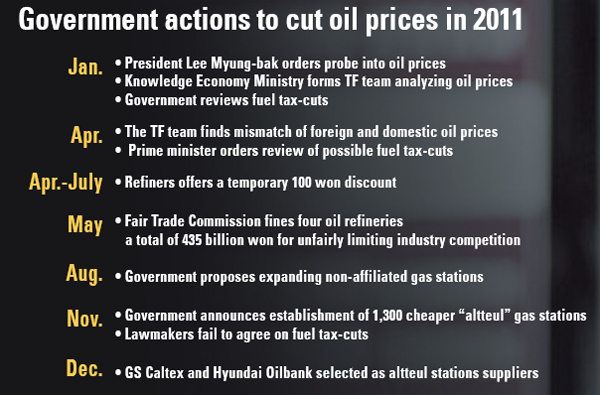 The final bidders will be assigned to particular regions where they have to supply gas, so they can reduce logistical burdens and trim storage costs. Seoul also agreed with the bid price proposed by the remaining refiners.

“Although it is higher than was hoped, there will be no problem in the government’s plan to sell gas at prices about 100 won lower than other regular stations,” an official from the Ministry of Knowledge Economy said.

The conflicts over oil prices between the government and refiners date back to January, when President Lee Myung-bak pointed to gas prices as one of the causes of rising inflation. Despite the refiners’ argument that domestic oil prices typically rise faster and fall slower than international prices, the government ordered the Fair Trade Commission to investigate the problematic structure of oil prices. The antitrust agency found that the nation’s four major refiners had been colluding to determine prices and limit competition. They were slapped with fines of more than 400 billion won in May.

In response to the government’s pressure on the oil industry, Oh Gang-hyun, the former chairman of the Korea Petroleum Association, made a statement about domestic oil prices in February. He proved that the Korean refiners supply gas at prices about 4 percent lower on average than their counterparts in other OECD nations. Oh was replaced by Park Chong-ung in May.

Now, the government hopes to lower fuel prices across the board by promoting competition among gas stations. 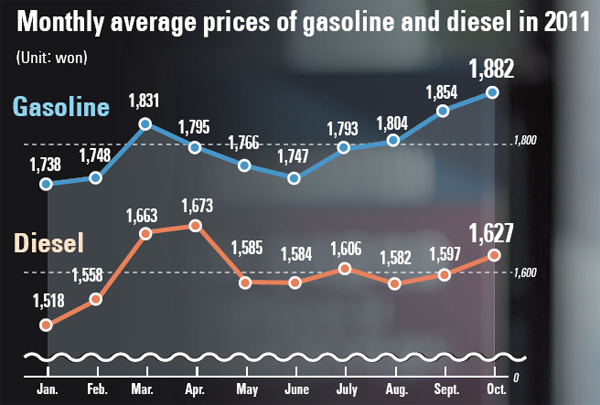 “We have a survey proving that competition between a regular gas pump and an alttuel station will cut retail gas prices by about 30 percent in one month,” an official at the ministry said.

However, the oil industry has expressed concern about the prospect of further heating up the market and raising tensions between refiners and their clients.

An official at a refiner said, “The company needs to mull ways to provide gas at a fair price both for altteul stations and its affiliated stations.” Refiners also have no idea whether they can turn a profit from supplying altteul stations, he added.

“These stations will make life harder for small, nonaffiliated gas stations that are suffering losses,” said another official.