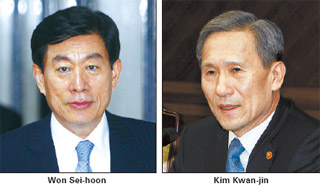 Pressure on President Lee Myung-bak to fire his spy chief intensified yesterday after his statements about the circumstances surrounding the death of North Korean leader Kim Jong-il were contradicted by unnamed military sources.

National Intelligence Service chief Won Sei-hoon was already being intensely criticized because the South’s main spy agency didn’t know about Kim’s death until it was announced publicly by the North. Then on Tuesday he challenged the North’s official description of where Kim died. 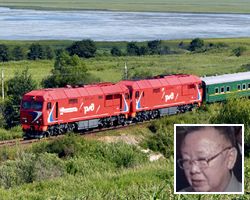 North Korea announced Monday that Kim died of a heart attack at 8:30 a.m. Saturday on a train while on a “high-intensity field inspection” outside the capital of Pyongyang. The train was supposed to be moving.

Won told lawmakers on the National Assembly’s Intelligence Committee Tuesday that Kim’s special train was, in fact, parked in Pyongyang at the time of his death, the JoongAng Ilbo reported yesterday.

“The train was parked at the Yongsong Station in Pyongyang at 8:30 a.m. on Saturday,” Won was quoted by ruling and opposition lawmakers who attended the NIS chief’s closed-door briefing on Tuesday. “Because Kim had some scheduled events on Thursday, we checked on the movement of the train, but it didn’t move on Friday and Saturday.”

Lawmakers asked Won about a rumor that Kim died at his residence on Friday night. Won said he had heard the same thing, but the NIS could not confirm its veracity.

Defector Lee Yun-keol, chairman of the North Korea Strategic Information Service Center and a former member of the North Korean Army’s Guard Command, a special unit that protected Kim Jong-il, said earlier that he had contacted a high-ranking North Korean source through China who said that Kim died in his residence in Pyongyang around 8 p.m. Friday.

Following Won’s remarks, sources in the military and the Ministry of National Defense told a different story. According to reports in the local media, they believe that Kim’s train was moving at the time of his death.

As the controversy snowballed yesterday, a spokesman of the National Defense Ministry tried to calm the situation. “We have the same source of intelligence on the North,” he said, “and there is no discrepancy. We share the same information and analyze it every day. The information sharing system is working well.”

A senior ruling party lawmaker said yesterday that Won must be held accountable when the situation calms down.

“This is a very serious matter that there is a discrepancy in the intelligence communities,” Grand National Representative Kwon Young-se, head of the Intelligence Committee, said in an interview with CBS radio.

“The timing is extremely grave, so talking about someone taking responsibility is inappropriate,” Kwon said. “But soon, we should talk about it.”

Kwon said it was wrong for Won to provoke Pyongyang by publicly challenging its description of Kim’s death. “The North’s leadership is extremely vulnerable right now, and inter-Korean relations are very delicate at this point,” Kwon said. “It was inappropriate to openly challenge an announcement the North had put serious efforts into.”

Won, who worked at the Seoul Metropolitan Government for most of his career, served as Lee’s vice mayor for administrative affairs from 2003 to 2006 when the president was mayor of Seoul.

Representative Choi Jae-sung of the Democratic Unity Party (DUP), a member of the Intelligence Committee, told the press that the National Intelligence Service is trying to “play with” intelligence.

“I have asked the NIS to submit evidence on Won’s remarks that Kim’s train was parked in Pyongyang, but it has failed to give me an answer,” Choi said. “It first said preparations will take some time, but now it says the information is confidential.”

Choi warned against “intelligence brinkmanship” meant to annoy North Korea ahead of next year’s elections. Conservative parties are known to benefit from tensions between the two Koreas at election time, while liberals are believed to benefit from smooth inter-Korean relations.

Another liberal lawmaker said what Won did was unacceptable. “It was like setting a fire at a wake,” he said. “It is an attempt to fuel the confrontation between the two Koreas.”

This was not the first time that Won has been pressured to resign. An embarrassing scandal broke out in February when unidentified agents made a failed attempt to steal information related to Korea’s attempted sale of supersonic trainer jets to Indonesia from a visiting Indonesian delegation. Despite the denial of the government, suspicions were high that the NIS was behind the botched operation. Two months later, a massive overhaul took place in the NIS leadership, but Won kept his post.

In June last year, an NIS agent became the subject of diplomatic dispute with Libya as he was detained and later expelled for spying activities. In July, reports were made that senior NIS officials were detained in China after failed attempts to collect information on the North.

Won, who was the first minister of public administration and security of the Lee administration, was named head of the NIS in February 2009.