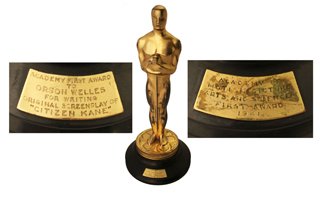 LOS ANGELES - The Oscar statuette given to Orson Welles 70 years ago for his critically acclaimed movie “Citizen Kane” has sold at auction for nearly $900,000, organizers said.

Magician David Copperfield was among those clamoring for the golden trophy, but he was the runner-up bidder for the Oscar, which sold to an undisclosed buyer for $861,542, Los Angeles auctioneer Nate Sanders said. The slightly tarnished Oscar for 1941 best screenplay is one of just a handful of illustrious Academy Award statues to sell for near the million-dollar mark.

“This is a testament to the popularity of Orson Welles and his magnum opus ‘Citizen Kane.’ I’m proud to have represented this fantastic award to the cinema collecting community,” Sanders said in a statement late Tuesday.

The statuette had failed to find a buyer when offered for sale in New York four years ago.

“Welles received this award for best original screenplay, which was, incredibly, the only Oscar that either ‘Citizen Kane’ or Orson Welles received,” the auctioneer said.

The film was Welles’ first feature, made when he was just 25 years old.

Considered a masterpiece of cinema, it has been voted the top film of all time by both the American and British Film Institutes. The black-and-white movie - which did poorly at the box office and failed to win a nomination for best picture - tells the story of a newspaper magnate bent on supremacy and is thought to be based on U.S. press baron William Randolph Hearst. Although “Citizen Kane” received Oscar nominations for best screenplay, best director and best leading actor, the writing award was the only Oscar that Welles won throughout his life.

The history of the statuette has included some hazy spells: Welles believed he had lost it, but it resurfaced after he died in 1985, and was bequeathed to his daughter Beatrice in 1994. In 2002 she won a legal case against the Academy of Motion Picture Arts and Sciences giving her the right to sell it. During that court case the statuette was valued at $1 million, Sanders said.