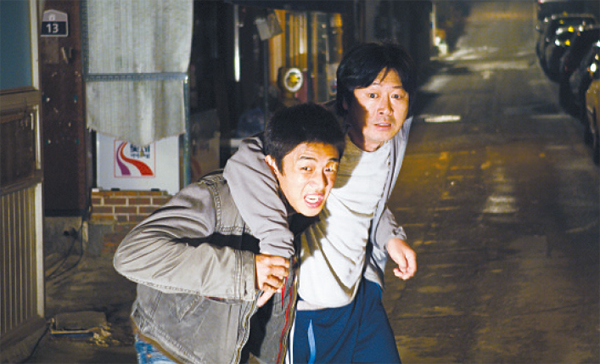 ‘Punch’ centers on Wandeuk, left, and how he overcomes coming-of-age struggles with the aid of his homeroom teacher, right. Provided by CJ Entertainment

In its annual Healing Cinema Best 10 event, the Korea Institute of Film Application (KIFA) announced its most therapeutic films, naming Korea’s “Punch” as the most healing motion picture of the year.

Cinema therapy is a relatively novel technique in the field of psychotherapy. Cinema therapists prescribe films to their patients. Advocates of the technique say that watching films with relatable life themes and subject matter can alleviate patients’ mental distress.

In 2005, film critic and clinical psychologist Sim Young-seop created the KIFA with the goal of using visual therapy to heal mental problems. Since then, the KIFA has held over 70 educational programs and training workshops on cinema and photography therapy. Its archive of therapy-appropriate films is the largest in the nation and is shared with various counseling centers, schools and corporations.

Each year, a panel of judges, including Sim and other film experts, compiles a list of 10 films that best help heal the soul through relevant themes about life. Past selections include Korean films “Poetry” (2010) and “Goodbye Mom” (2009), French film “The Diving Bell and the Butterfly” (2008), American film “Reign Over Me” (2007), and Singaporean film “Be with Me” (2006). This year, the KIFA took a new approach to its selection process by using Twitter to take average moviegoers’ opinions into consideration. “Punch” was the most-suggested film among Korean Twitter users. 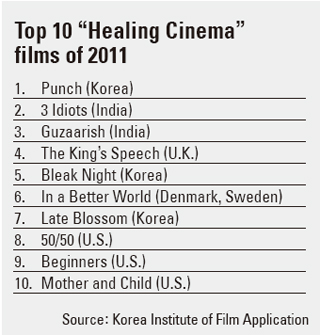 The KIFA focuses on a different theme each year. Since the first Healing Cinema Best 10 event in 2006, the themes have been emotionality, problem-solving skills, originality, the meaning of life, the aesthetics of cinema and accessibility. This year, the institute focused on films that portray tolerance and acceptance.

Based on Kim Ryeo-ryeong’s best-selling novel “Wandeuk-i,” the film, directed by Lee Han, is a coming-of-age story of a rebellious teenage boy named Wandeuk. His nosy homeroom teacher encourages him to learn more about his Filipino immigrant mother, and their teacher-student relationship helps him mature into a young man.

Attracting more than 5 million viewers so far, “Punch” was one of the most-watched Korean films of this year and was most recently offered a spot at the 2012 Berlin International Film Festival.

“Through the story of one young man’s dreams, ‘Punch’ teaches its audience why we may seethe in anger and lack of communication but still overcome all boundaries and seek to understand and embrace each other,” the KIFA explained in its press release.

Second and third on the KIFA’s list are Indian films “3 Idiots” and “Guzaarish,” respectively. The film “3 Idiots” is a comedy that follows two students through their quest to find a third friend who disappeared after their college graduation.

“Guzaarish,” a drama, tells the story of a quadriplegic ex-magician who files a petition for permission to die through euthanasia.

Also on the list are Academy Award-winning films “The King’s Speech” and “In a Better World,” as well as other critically acclaimed films such as “50/50” and “Beginners.”