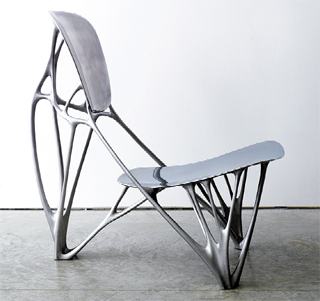 “Bone Chair” (2006) by Dutch designer Joris Laarman is part of his first solo show in Korea at Kukje Gallery in central Seoul. Provided by the gallery

The chairs and tables now on display at the Kukje Gallery in the art zone east of Gyeongbok Palace in central Seoul might remind viewers of the Art Nouveau style. Their legs and supports have flowing lines that resemble shapes found in nature, similar to arts and crafts in the style of the late 19th century.

With the chairs in particular, the legs, seat and back of each are connected so smoothly that it is hard to distinguish the points of contact. That’s because the seat, back and legs of each of the chairs were not made separately.

They were cast as one mold and polished for about 300 hours, making them similar to sculptures.

So should the designer of the chairs, Joris Laarman of the Netherlands, call his studio a sculptor’s workshop? 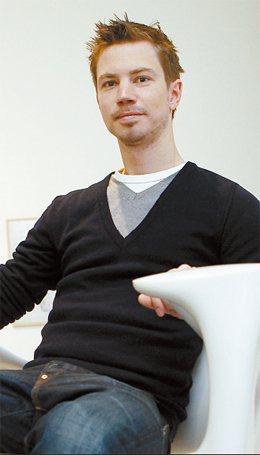 “I call it my studio laboratory,” the 31-year-old designer told reporters last week at the Kukje Gallery. “I work with many scientists and engineers.”

In fact, his designs come not only from artistic inspiration, but also from a high-tech computer program. In order to design a chair, he uses new computer algorithms based on software developed by a German scientist that simulates the growth of human bones.

If the designer puts the weight of possible users of the chair and other factors into the computer program, the algorithms work out the possible proportions and shapes that animal bones or trees in nature will need to support the weight and to meet other factors while using a minimum input of materials.

“In other words, the algorithms help chairs be designed in the way Mother Nature would have made them if she were a chair designer,” Laarman said.

“And I intervene in the program’s working process, so chairs are designed via a Ping-Pong game between the software and me.”

“So, my work is a high-tech version of Art Nouveau,” he added. Art Nouveau artists resisted the traditional and typical designs of the time and tried for new, elegant forms and patterns, inspired directly from nature. Now, Laarman has taken it one step further, letting part of his designs be made directly with nature.

“This inspiring synthesis of digital processes and traditional inspiration has led Paola Antonelli, senior curator of design and architecture at MoMA, to argue that Laarman is a new kind of designer reflecting both the power of innovation and the ‘organic tradition’ that goes back to Art Nouveau,” the Kukje Gallery said in a press release.

The exhibition at the local gallery, which continues through early next month, shows the “Bone Chair,” “Bone Chaise” and “Bone Armchair” made in this way, on the first floor. They were each made of different materials, as the young designer is continuously testing new materials.

In the exhibition, the most unique material is polyurethane-based resin for the “Bone Chaise.” The material gives the chair a translucent milk color and soft luster.

What is more interesting is that the chair’s surface will get softer as someone sits in it because the material softens as it is warmed.

The exhibition also shows a “Branch Bookshelf” and “Bridge Table.” And on the second floor, viewers will see his new “Forest Table” series.

Laarman received Wallpaper’s Young Designer of the Year award in 2004, and in the same year established his studio and laboratory.

He has since received many awards, including the Red Dot Design Award in 2006 and the Innovator of the Year award from the Wall Street Journal this year.