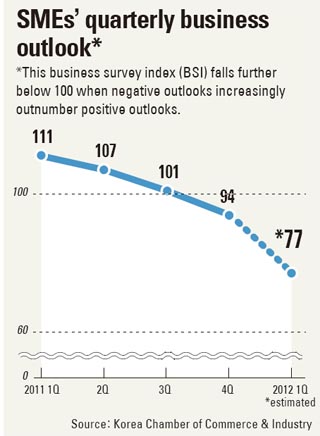 The CEO of a small ship parts manufacturer in Busan’s Noksan industrial district used to ignore the signs offering “quick loans” on his way to work, but nowadays the garish signs catch his attention.

“We had a large loan mature at the end of last month, but the bank refused to roll it over,” said the chief executive, surnamed Jeong. “I could only afford to pay off 100 million won [$86,500] of the principal, so I’ll have to suffer the penalties for repaying late.”

“The bank sent me a notice saying that it will seize factory equipment if the full sum is not repaid by the end of this month,” he added, conceding that he was at his wit’s end in terms of trying to overcome the liquidity crunch without resorting to private lenders, who offer easy cash with high interest payments.

As rocky financial forecasts drive commercial banks toward conservative capital management plans and prompt them to avoid risky loans, Korea’s small and midsized enterprises (SMEs) are finding it increasingly difficult to secure loans. Many are already struggling as exports slow down and the global economy contracts.

Banks are choosing not to lend to SMEs as their loan default rates earlier this year surpassed the levels seen during the 2008 financial crisis. This is fueling a vicious spiral of liquidity crunches, operational difficulties and loan defaults for many of the nation’s smaller companies.

Experts fear that many will be pushed toward high-interest private lenders in their search for financing during the economic downturn that is forecast next year.

Compared to conglomerates, smaller businesses have always had less clout in trying to borrow from commercial banks. But lately, many they have found themselves in dire straits as banks tighten the spigot further in an effort to bolster their own financial soundness.

Some 19.01 trillion won in loans to SMEs have been guaranteed by these agencies, which are responsible for paying back roughly 85 percent of the borrowed amount in the event of a default.

“The data shows that commercial banks are becoming increasingly reluctant to lend money to SMEs without additional assurances from loan guarantee agencies,” said an official at the Korea Credit Guarantee Fund.

Banks say such trepidation is understandable. According to the Financial Supervisory Service, the default rate of commercial banks’ loans to SMEs shot up from 1.3 percent at the start of the year to 1.83 as of the end of October. This exceeds the previous high of 1.7 percent at the end of 2008 during the height of the financial crisis.

But banks’ decision to turn off the credit taps has led to pressing challenges, such as an inability to extend the maturity of loans and higher interest rates.

“Even with the same level of collateral, banks charge a maximum interest rate of 9 percent a year, as opposed to 4 percent or 5 percent for conglomerates,” said Suh Byung-moon, chairman of the Korea Foundry Cooperative Association.

The problem has been compounded by the drought seen in other financing routes. Savings banks have been scaling back their corporate loans - an area where SMEs make up the majority of borrowers - as the shaky sector attempts to meet financial regulators’ demands for financial soundness by curbing risk.

Savings banks’ corporate loans stood at 55.02 trillion won in 2010 but fell to 40.5 trillion won as of June this year, according to FSS data.