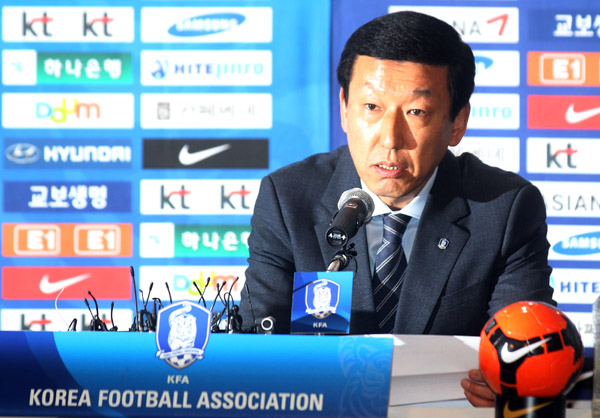 Newly appointed national football team coach Choi Kang-hee said yesterday he will only manage the team until the end of the Asian qualifiers for the 2014 FIFA World Cup, but not for the World Cup itself.

Just a day after he was announced as the new coach, Choi held a press conference and revealed that he has told the Korea Football Association (KFA) that he will guide the team until June 2013, about a year before the World Cup starts in Brazil.

On Wednesday, Kim Jin-kook, CEO of the KFA, told reporters that the 52-year-old coach will be leading the team at the 2014 FIFA World Cup if the team qualifies, but Choi turned down the offer because he thinks he is not qualified to manage the team at the football event, which occurs every four years.

“The reason I accepted this job is that we need to go to the World Cup,” Choi said. “But even if we qualify for the World Cup, I will not continue my job because I think I am not good enough to achieve big things on that stage.”

Choi said another reason is that he wants to rejoin Jeonbuk Hyundai Motors FC in the Korea Professional Football League (K-League) in the near future. Before taking charge of the national team, Choi has coached Jeonbuk since 2005 and won the K-League championships in 2009 and this year. He also helped the North Jeolla club clinch the Asian Football Confederation Champions League title in 2006.

“I really felt sorry because I have broken my promise to Jeonbuk fans and players,” Choi said. “That was the reason why I turned down the job in the first place.”

The two-time K-League Coach of the Year said he and Jeonbuk verbally reached an agreement to sign a long-term contract, but in the end, he thought it was more important to help Korean football in order to prevent negative results. On Wednesday, Hwangbo Kwan, head of the technical committee in the KFA, said he visited Choi three times in order to persuade him.

Choi’s first task is to handle Kuwait on Feb. 29 to reach the final round of the Asian qualifiers. Korea, currently the leader in Group B with 10 points, can be eliminated if it loses to Kuwait and Lebanon beats or ties the United Arab Emirates.

Choi, who previously served as national team assistant coach under Humberto Coelho from 2003-4, acknowledged that he needs to organize the team in a short time to produce positive results, but said he is confident in facing any team in Asia. However, Choi added that since overseas-based players are not playing well in their leagues, he is considering building a squad geared toward K-League players.

Choi, who represented Korea in 37 games as a defender in the 1980s, is renowned for his aggressive tactics. Jeonbuk was the best offensive team in the K-League, scoring 67 goals in 30 regular season matches this year. The team was also the top offensive team in this year’s AFC Champions League, where it finished runner-up, netting 33 goals in 12 matches.

But Choi said he will start to think in terms of team tactics after he forms the squad, including the coaching staff.

He said the team should prepare for counter attacks of other Asian teams and needs to think about balancing offense with defense.

“In the final round of qualifiers, a lot of games will be decided by one goal,” Choi said. “We have to focus on attack, but at the same time we also need to consider balancing the defense.”

As for his successor, Choi said he hopes to see a foreign coach take the helm although there are many talented young Korean coaches. Choi said he will try his best although it isn’t an easy job.