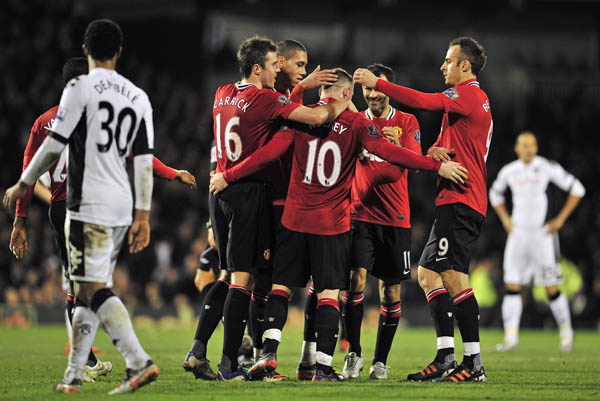 
LONDON - Manchester United managed the rare feat this season of outshining Manchester City’s goal-scoring prowess on Wednesday to keep the heat on its neighbor in the Premier League title race.

While City maintained its two-point lead over United with a 3-0 victory over Stoke, its second-place rivals routed Fulham 5-0 at Craven Cottage.

Such emphatic victories have been the norm for big-spending City this season, but for United it was the biggest in three months.

“It was very impressive, we’ve not scored as many as we’d like to but we’d been playing well,’’ Giggs said. “The second part of the season we always kick on and put in performances and that’s pleasing.

“We don’t want to rely on the forwards for goals, we need to share them around.’’

It was a tighter encounter at Aston Villa, with Arsenal relying on Yossi Benayoun’s late goal to secure a 2-1 victory for his fifth-place side.

Liverpool is two points behind Arsenal after Charlie Adam missed a penalty kick in a 0-0 draw at Wigan. Luis Suarez featured for Liverpool a day after receiving an eight-match ban - on hold pending any appeal - for racially abusing United defender Patrice Evra.

But after two days of off-field controversies, United produced an eye-catching display that cast the Premier League in a more positive light for its global audience.

United had failed to win on its past three visits to Craven Cottage but Danny Welbeck’s fifth-minute opener, capitalizing on lax defending, ensured that miserable run would come to an end.

The lead was doubled when a cross from Giggs was headed home by Nani in the 28th before the 38-year-old midfielder extended his unique streak of having scored in every Premier League season since its inception in 1992.

A shot deflected off Philippe Senderos and looped into the net three minutes before half time.

An industrious performance from Wayne Rooney was capped in the 88th when the England striker fired home from 30 yards.

But United saved the best until last as Berbatov netted his 50th goal for United with a nonchalant backheel from Antonio Valencia’s cross.

“In the second half we took our foot off the gas but we were always in control and we knew we were going to win the game,’’ Rooney said.

The victory, though, came at a cost with Phil Jones forced off injured in the 20th after being caught by Clint Dempsey’s arm while dueling for the ball. AP