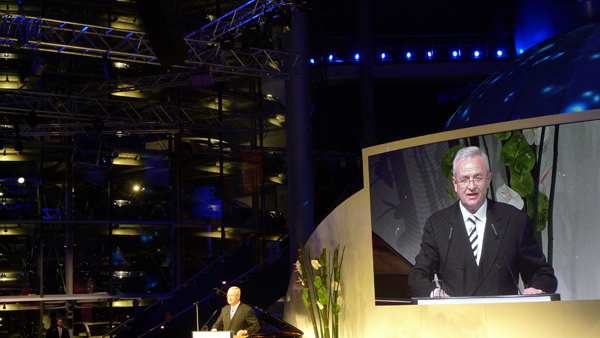 DRESDEN, Germany - Would the success of Volkswagen’s luxury Phaeton sedan and its glass-clad manufacturing plant in Dresden, Germany, have been possible without the Korean market?

Although China currently holds the crown as the largest Phaeton market outside of Germany, sales in Korea played a vital role in helping Volkswagen’s “Transparent Factory” keep running in the early days.

The German automaker Volkswagen celebrated the 10th anniversary of its famous Transparent Factory, which was the birthplace of the automaker’s high-end Phaeton, earlier this month. The Phaeton was Volkswagen’s attempt to compete with Mercedes-Benz and BMW.

“The success of Phaeton and the Transparent Factory has been a motivation to reach for new heights,” said Martin Winterkorn, Volkswagen chairman, during a celebratory speech at the plant in the former East German city.

Korea holds a unique spot in the Phaeton’s history as its second-largest market outside of Germany. Korea was the largest foreign market of Phaeton when the vehicle was launched in Korea in 2005. Korea surrendered the title to China in the last two years.

More than 2,000 units were sold in China last year, and Volkswagen is confident of reaching 3,000s this year.

But after the Phaeton failed in the U.S. market and before China sales grew, the Korean market was of major importance. In the first year Phaeton was introduced to Korean consumers, the company sold nearly 300 units. That figure nearly tripled the following year, and sales remained at that level until the global economic crisis of late 2008.

In 2006, Volkswagen celebrated production of the 1,000th unit for the Korean market at its eco-friendly plant.

The Phaeton failed in the U.S. Volkswagen tried penetrating the market in 2004 and sold 1,433 units that year. However, the following year it sold only 820 units, and it announced it would discontinue sales after 2006, when only 235 units were purchased by Americans. However, earlier this year, Volkswagen hinted at a reentry in the U.S. 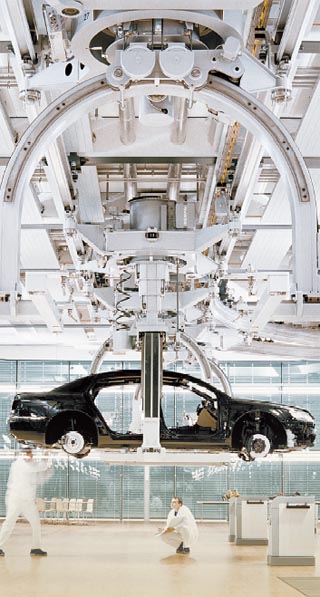 Volkswagen’s Phaeton production line at its Transparent Factory in Dresden, Germany. Provided by the company

Despite worries of a worldwide recession, Volkswagen’s head of sales, Markus Pohl, was confident that Phaeton’s sales will remain on their current course.

“It’s not easy to plan with such uncertainties in the global market,” Pohl said. “Yet, for now we are much better than last year, and we believe China and the Korean market will remain strong.”

Volkswagen have been emphasizing the detailed craftsmanship that goes into the Phaeton and the glamour of the Transparent Factory.

When they were invited to the celebration at the facility, former national soccer team coach Cha Bum-kun and his wife were amazed when they walked to dinner tables on the Phaeton’s production line. The couple bought a Phaeton in 2007.

“I thought this was a grand hall,” Cha said. “This really changes the way I look at my own Phaeton. I knew that Phaeton was handcrafted unlike any other luxury car, but looking at this production line and this plant makes me proud to be an owner.”

Hans-Ulrich Seidt, German ambassador to Korea, who was also invited to the event, said he hopes robust sales of the Phaeton in Korea would demonstrate Germany’s unique craftsmanship and strengthen economic and cultural ties between the two countries.

Volkswagen invested over 186.6 million euros ($113 million) in building one of the world’s most unique automotive plants, which looks more like a modern museum than an automotive factory.

Opened in 2001, the factory’s 55,000 square meters (590,000 square feet) of production floors are mostly wood, and the walls are glass. It’s become an architectural landmark in the free state of Saxony, a unique status for a car factory. Aside from 300 employees on the assembly line, much of the work is done by robots.

The futuristic plant is environmentally friendly and an appropriate home for the fine craftsmanship that goes on within. The factory is also used to make Bentley’s Continental GT lineup.

Roughly 40 to 50 Phaetons are rolled out per day. The completed vehicles are parked on a unique 40-meter-high glass tower until they are delivered to their owners. 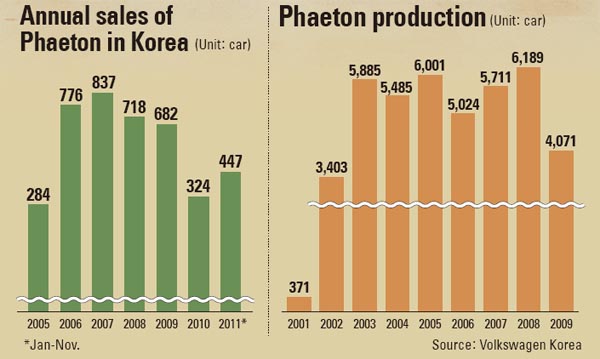 Volkswagen has also been focusing on transforming the Transparent Factory into a cultural events venue.

Numerous concerts and art performances are held at the plant throughout the year.

In 2002, the opera “Carmen” was performed, while the symphonic parable “Ahab” was performed in September 2010. Since 2008, the plant has hosted the open-air concert Classical Picnic.

According to Volkswagen, more than a million guests have visited the factory, including German President Richard von Weizsacker, former Russian leader and Nobel Prize winner Mikhail Gorbachev and Prince Albert of Monaco.

Cultural events are not limited to the company’s Dresden plant.

Autostadt is an automobile theme park set up by Volkswagen in 2000, which today is the second-most popular theme park in Germany and one of the top ten attractions recommended by the German tourism agency.

Located next to Volkswagen headquarters in Wolfsburg, Autostadt has been visited by more than 23 million people, and this year it boasted 2 million visitors.

Autostadt offers a huge automobile museum that displays historic vehicles, including the first Volkswagen Beetle and the first automobile that ran on steam. Two 40-meter glass towers hold completed Volkswagen vehicles waiting to be delivered to customers. For Christmas, Autostadt has a traditional German Christmas market that sells mulled wines and German sausages.

Visitors can drive four-wheel-drive vehicles along a river for a thrilling off-road experience.

The unique cultural offerings by Volkswagen have caught the attention of Korean manufacturers. Hyundai Motor has shown an interest as 10 to 15 of their executives, including some from Innocean, the Korean automaker’s advertisement affiliate, visited Autostadt.

“Their visit was short, around 45 minutes, but they were undoubtedly very interested in how this park operates,” said Paul Riches at Autostadt, who guided the Hyundai Motor officials.

There have been rumors that Hyundai Motor has been making plans to turn its plant in Ulsan into a similar automobile theme park.