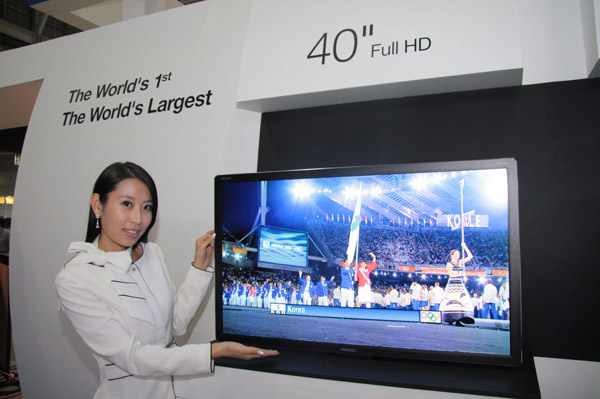 Samsung Mobile Display, the world’s No.1 supplier of OLED screens, shows a mock-up of an OLED panel for 40-inch TVs at a technology exhibition back in 2008. Provided by the company

With the advent of thinner, lighter and clearer organic light-emitting diode (OLED) TVs, Samsung Electronics and LG Electronics are hoping to carry their market dominance over to this new technology.

The 55-inch OLED TV will be the largest OLED TV ever, as the display has so far been used mostly for smaller devices like smartphones.

What’s more, whereas oftentimes it would take years before the displayed gadgets at such technology shows become available in the market, Samsung and LG are expected to roll out the products before the end of next year.

Should they do that, they would be the world’s first TV manufacturers to mass-produce OLED TVs bigger than 50 inches.

This has some pundits predicting that liquid-crystal display (LCD) TVs will be passe within a couple of years, with OLED taking center stage.

The OLED technology allows for thinner screens because its pixels directly emit light and so does not require separate backlights, as is the case with LCD TVs. It also offers a greater contrast ratio and viewing angle, while it is believed to offer a response time up to 200 times faster.

In a recent report, U.S. investment banking firm Goldman Sachs said that with these charms, OLED TVs will likely help TV makers battle ahead in the next few years despite the stagnant market.

The global TV market is expecting to post 0 percent growth this year, global market research firm DisplaySearch said earlier. It cited weak demand in the U.S. and Europe, which remain embroiled in one of the worst financial crises in modern times.

However, OLED TVs are not as new to the scene as it many appear. Fallen giant Sony ambitiously rolled out an 11-inch OLED TV in 2007 as a symbol of a turnaround in its flagging fortunes.

“I want the world’s first OLED TV to stand as a symbol of the revival of Sony’s technological prowess,” the Japanese company’s then-president Ryoji Chubachi told reporters at the time. “I want this to be the flag under which we charge forward to turn our fortunes around.”

But Sony finally pulled the plug on the next-generation TV due to lackluster sales in 2010 and refused to publicly disclose sales figures.

LG also rolled out 15-inch OLED TVs in 2009, but due to their hefty prices, the products attracted little attention.

Still, Goldman Sachs said in the report that with the persistently falling prices of LCD panels, TV makers’ appetite for premium technology is greater than ever. And with larger OLED TVs set to debut next year, the TV industry will likely realign around OLED TVs in the coming years.

The firm said that the new models will be at least 50 percent more expensive than LCD TVs for now, but this price difference is expected to drop to 30 percent in 2015 and 20 percent by 2018.

It also forecast that one in four TVs sold to households will use the OLED technology by 2018.

Another interesting aspect to this development is the history of Samsung and LG’s commitment to OLED.

LG first attempted to become a pioneer in this area, but it was Samsung that successfully invested and marketed this panel technology after jumping on the bandwagon.

In 2009, LG made new inroads by releasing a 15-inch version, although this did not prove lucrative.

That same year, Samsung also saw the potential in OLED and launched its Samsung Mobile Display (SMD), a joint venture between Samsung Electronics and Samsung SDI.

Today, SMD is responsible for more than 98 percent of global OLED shipments, and experts predict its leadership will continue for several years.

During a lecture by LG Electronics on Nov. 2, Havis Kwon, the president of its home entertainment division, said “we will release OLED TVs earlier than our competitor,” referring to Samsung Electronics.

It said it will decrease its investment in the LCD business from an initially planned 5 trillion won ($4.3 billion) to 4 trillion won next year. It also revealed plans to pour more money into other future display technologies, such as film-type patterned retarder technology for 3-D TVs and OLED panels for large-sized TVs.

“Whether LG Display will continue its leadership in the display market will depend on the success of its investment in large OLED TVs,” said Lee Jeong, an analyst at Eugene Investment & Securities.

But Samsung is not planning to sit idly and watch.

Bloomberg reported on Nov. 3 that Samsung signed a technology licensing deal with DuPont, a U.S. chemical maker. The technology apparently uses a nozzle to print OLEDs on glass to reduce costs.