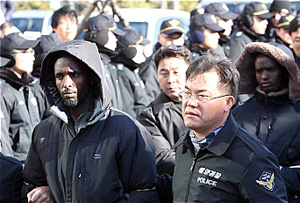 The Supreme Court upheld a life imprisonment sentence for the Somali pirate found guilty of hijacking a Korean freighter and attempted murder of its captain.

Mahomed Arai, 23, received the original sentence from a Busan appeals court in September for the January hijacking of the Samho Jewelry and attempted murder of Seok Hae-kyun.

The Supreme Court also upheld the lower court’s sentences for four other Somali pirates - 15 years for Aul Brallat, 13 years for Abdikhad Iman Ali and Abdullah Ali, and 12 years for Abdulahi Husseen Maxamuud - for their role in the hijacking. The pirates were found guilty of attempted murder, hijacking, maritime robbery and obstruction of government officials’ execution of special tasks.

“Their attempts to hijack a Korean vessel and their attack on Korean sailors deserve the death penalty or life imprisonment, but the justices considered the fact that eight pirates were killed in the rescue operation and Captain Seok’s recent recovery,” said Lee Sang-hoon, chief justice of the Supreme Court, in the ruling.

The Samho Jewelry was hijacked by Somali pirates in the Arabian Sea en route to Sri Lanka on Jan. 15. The Navy’s Cheonghae Unit rescued the vessel and its sailors after a firefight. In the operation, Seok was seriously wounded by gunfire from pirates.

Arai was one of five pirates captured during the Navy’s rescue. Eight pirates were killed in the operation.