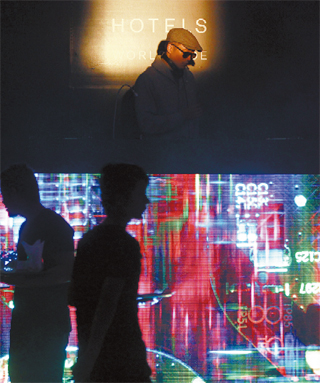 DJ Soulscape, from Korea, DJs at 18 Bund.Provided by W Seoul

As the DJ booth blasted out an eclectic mix of old-school disco and rock music, Shanghai trendsetters took to the dance floor at 18 Bund, on the fashionable Bund Street in Waitan, Shanghai. The party, held last Wednesday, followed the first “W Happening - Design Lab” held in mainland China, organized by W Hotels Worldwide.

Since the opening of its first branch in New York in 1998, W Hotel has been gaining a particular reputation among luxury hotels for creating a hip, pop-culture-centric image that has distinguished the brand from its competitors.

Promoting this trendsetting image further, the hotel launched “W Happening - Design Lab” last year with the aim to recognize and foster up-and-coming artists from around the world through various events at the W. At the event, celebs including Roseline Luo, Miss Universe-China, fashion bloggers, young artists and around 100 journalists were in attendance.

“When W Hotel hit New York City in 1998, it changed the hotel industry. It wasn’t just a luxury boutique hotel that displayed pretty things inside the building. The hotel leads trends and features projects that showcase what’s new and next in design, fashion and music,” said Arnaud Champenois, Asia-Pacific brand director for W Hotels Worldwide.

A crowd views photographs by Annemarieke van Drimmelen at the “W Happenings - Design Lab” in Shanghai. 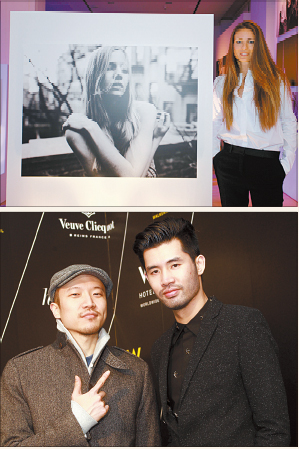 Top: Annemarieke van Drimmelen poses with one of her photographs. Above: Seoul’s DJ Soulscape, left, poses with Angus Wong at the “W Happenings - Design Lab” held at 18 Bund on Dec. 14 in Shanghai.

The first Design Lab event was held in Tokyo last December and then at Seoul’s W Hotel in July 2011. This third Design Lab in Shanghai comes at an opportune time for the hotel - three W Hotels are slated to open for the first time in mainland China starting next year.

Being based in New York, the majority of the hotel branches operate in North America but the group has big plans in the future to expand in Asia.

“The biggest growth opportunity in the hotel industry, or generally any industry in general these days, is in the Asia-Pacific region,” said Champenois.

Currently, there are 16 W Hotels in Asia, including Korea, Thailand, Singapore and Hong Kong.

The main push next year for the hotel will be to start successful launches of the hotel branches in mainland China, first in Guangzhou in July next year. By early 2014, the hotel plans to open W Hotels in Beijing and Shanghai.

“Maybe in terms of size and notoriety, Beijing might be the biggest but we decided to hold our mainland China Design Lab event in Shanghai because of how the city’s image coincided with W Hotel’s brand image - glamorous, playful and fashionable,” said the brand director.

At Design Lab Shanghai, fashion photographs by model-turned-photographer Annemarieke van Drimmelen - one of the young artists chosen by the hotel through Design Lab - were featured on the main stage.

The black-and-white photographs showed fashion models in uninhibited moments, whether they were smoking in their flats or posing in nature.

“Being a model myself, I am familiar with the hectic, backstage madness that happens during fashion shows. I wanted to show models in their own environment, in a raw, intimate, real state,” said van Drimmelen.

Another Design Lab artist, Angus Wong, said his career as a DJ would have been almost nonexistent if it weren’t for the W Hotel’s Design Lab program.

“Being a DJ as a career is tough. To get international recognition as a DJ is tougher, almost impossible for some, but I was lucky enough to get my name out there through this project,” said Wong, who is also a resident DJ at the W Hotel in Hong Kong.

Along with van Drimmelen and Wong, the main art exhibition for “W Happening - Design Lab” in Shanghai is a design installation by Studio Juju, an artist team comprising of Timo Wong and Priscilla Lui who were the winners of this year’s W Hotels Designers of the Future Award.

“The Design Lab program in Shanghai is our way to put the buzz out there for W Hotel before our launch in China, but in our very own trendsetting, culturally informed way,” said Champenois.