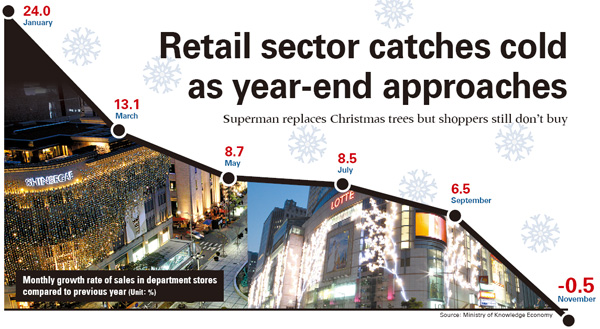 Usually department stores are adorned with giant Christmas trees to celebrate the birth of Jesus.

But this year, what awaits customers is neither a Christmas tree nor Santa Claus. It’s Superman.

One of the world’s most beloved comic book characters appeared at Uplex, a young casual brand store launched by Hyundai Department Store.

While it’s a little unusual to see a super hero in a department store during Christmas, Hyundai said its intention is to encourage customers in their 20s and 30s who were frustrated this year due to unemployment and runaway prices. 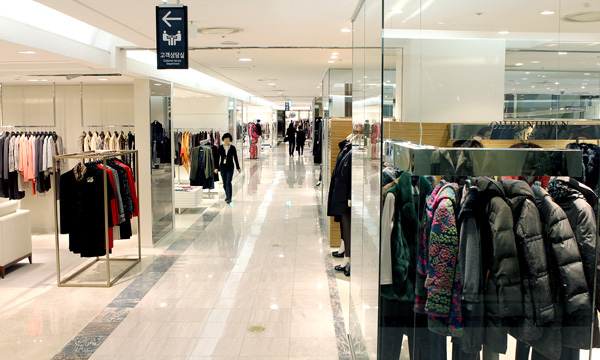 Customers stroll through a nearly empty department store in Seoul in November during the unusually long year-end bargain sale. By Byun Sun-goo

“At first, customers found the Superman display interesting, but later, they showed more positive reactions, saying that Superman cheers them up,” said Choi Won-hyung, an official at Hyundai. “That’s why we decided to keep the Superman decoration instead of Christmas trees this year.”

Industry sources said this is just one of many examples that shows signs of changes in Korea’s Christmas scenes due to the recession’s toll on retailers.

Although major department stores - Lotte, Hyundai and Shinsegae - have extended their ritual year-end sales period to an unprecedented 17 days from Nov. 25 to Dec. 11 to encourage consumers to open their wallets and make up losses, their sales increase has been much lower than previous years.

Hyundai Department Store saw a 5.2 percent sales increase this year-end compared to last, but this is far below its 2010 sales record, when growth went up 16.6 percent compared to 2009.

In 2010, Shinsegae Department Store’s year-end bargain sales increased 20 percent compared to 2009, but this year it only saw a 13.8 percent year-on-year increase.

“Given that last year’s year-end bargain sales lasted for 10 days and this year’s lasted for 17 days, we didn’t reap as much as we originally anticipated,” said a department store official who spoke on condition of anonymity. “We even offered goods at up to 50 percent discounted prices but that didn’t work. If this trend continues, it will be hard to achieve higher growth next year.”

According to Ministry of Knowledge Economy statistics on Dec. 15, three major department stores’ monthly sales growth compared to the previous year recorded minus 0.5 percent in November, the first negative growth in 33 months.

According to Auction, sales of Christmas ornaments and party items soared 38 percent in late November and 45 percent in December compared to a year earlier.

“Amid runaway prices and continued economic downturns, it seems many customers decided to feel the Christmas vibe by decorating with ornaments on their own and throwing parties and other events at home,” said Seo Tae-mi, an official at Auction. Seo said in better times, people go out to celebrate.

After the government ordered major plants and buildings to scale back their electricity use by 10 percent during peak hours to conserve energy, Christmas displays at department stores and on streets in
Myeong-dong and Gangnam are less fancy this year.

“I expected a nice night view of the downtown, decorated with thousands of light bulbs as previous years, but I can hardly find a place like that,” Lee Yoon-ji, 27, said during a recent visit to the capital from Daegu. “I don’t feel like Christmas and perhaps I’m not the only one feeling this way.”

Due to worries about power, businesses are being frugal in greeting the end of the year. Lotte Department Store’s main branch in central Seoul has shortened the hours it keeps lights turned on.

COEX mall in Samseong-dong, southern Seoul, decorated with a polyester silver foil. The energy-saving material plays the role of light bulbs, but is less illuminating.