No matter the job, ‘license king’ ready to roll

No matter the job, ‘license king’ ready to roll 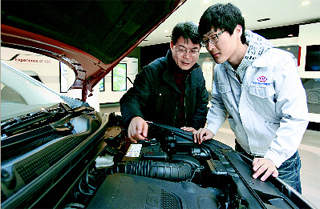 Kim Do-hyeon, right, a high school student who has earned 50 licenses in less than three years, converses with his homeroom teacher Yoon Jeong-hyeon about automobile maintenance. By Oh Jong-chan

A student’s homeroom teacher asks, “How is your training going?”

Kim Do-hyeon, his 18-year-old student, answers the welcome visitor, “It’s more fun to learn by touching instead of just reading it in a book.”

The training was neither for school studies, sports nor music.

On Dec. 15, Yoon Jeong-hyeon, 51, who had been Kim’s homeroom teacher his freshman year, came to visit his former pupil in a Kia automobile factory in Gwangju’s Naebang-dong.

With 50 licenses under his belt, Kim, a senior at Jangheung Vocational High School, has become the new “license king,” replacing the previous record held by a high school student - 37 licenses in three years.

Meeting Yoon played a critical role in Kim acquiring the licenses he did.

“At first, I was planning to get only one or two licenses,” Kim said. “However, my teacher told me that having licenses is the best way to demonstrate one’s ability other than having a degree of higher education.”

Kim earned licenses in three fields - computers, automobiles and construction equipment. All will be useful when seeking employment.

Starting with the Information Technology Qualification (ITQ) test in June 2009, over the past two and a half years, he has earned licenses as a welder, an automobile maintenance engineer, a construction equipment maintenance engineer and a crane operator. He has also earned several international certificates, passing all the licensing exams in the field of automobiles.

While he has failed four or five times in the numerous written and practical tests he’s taken, it has not been enough to slow him down.

“I think that showing newspaper clippings and information on cases that can be helpful for employment or going to university has stimulated his sense of achievement,” Yoon said.

Yoon also earned attention in 2008 when he encouraged 40 students studying automobiles to get 460 certificates.

Kim is said by his friends to be a tenacious person. He is usually quiet and concentrates fully on his work, once he sets his mind to something.

“My teacher had me do the same thing as other students, but I studied and practiced more while others were playing,” Kim said.

Entering his school with high marks, he has never missed being at the top of his class in three years. Every morning, at 7:30 a.m., he goes to school, and he spends the rest of his time studying for certificate tests and doing school work. As his family was very poor, he became mature at an early age.

Although his middle school grades were high, he applied to a vocational school to earn money sooner than others.

“My father is a farmer who lives in the countryside,” he said. “For the sake of my grandmother and mother, I chose to work rather than go to university.”

He has also faced difficult times, especially when preparing for the welding license test, which can prove difficult even to adults. He studied welding in books for a month as he had no place to practice. “Since I did not have much expertise, studying the theories and training was so hard,” Kim said. “I sometimes thought that I might be doing something foolhardy, but I overcame it, dreaming to become the best in this field.”

Kim has many goals. He wants to enter the automobile industry and design cars, and he also wishes to get into a construction company and become an expert on heavy equipment such as excavators and forklifts.

After graduation next February, he may have to decide whether to get a job or apply to work as a technician soldier in the military with his construction machineries license.

“More students are wishing to study automobiles and dreaming to become a person just like Do-hyeon,” Yoon said.