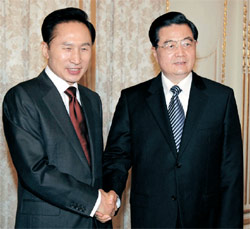 South Korea and China will hold high-level talks in Seoul next week to assess and exchange views on the situation on the Korean Peninsula following the abrupt death of North Korean leader Kim Jong-il, a senior Seoul official said yesterday.

Seoul and Beijing have been in consultation to hold the talks, which will be led by South Korean First Vice Minister Park Suk-hwan and Chinese Vice Foreign Minister Zhang Zhijun, possibly on Tuesday, the official at the Foreign Ministry said.

“The meeting is aimed at sharing views on the current situation after the passing of Kim Jong-il and consulting on the way forward regarding the Korean Peninsula,” the official said on the condition of anonymity.

“Both sides have been in working-level preparations to hold the meeting in Seoul next week,” he said, adding that the two sides are in the process of arranging the exact date for the one-day talks.

In the wake of the unexpected death of Kim, analysts expect China to bolster its support for North Korea as Beijing wants to avoid any instability in the North to avoid a mass influx of refugees. For China, North Korea is also considered a buffer zone to the U.S. alliance with South Korea.

A day after the bombshell news of Kim’s death was announced Monday, South Korean Foreign Minister Kim Sung-hwan and his Chinese counterpart Yang Jiechi talked by telephone and agreed on the importance of ensuring peace and stability on the Korean Peninsula. The two ministers also vowed to keep in close communication and cooperation.

Seoul’s chief nuclear negotiator Lim Sung-nam met his Chinese counterpart Wu Dawei on Friday during a two-day visit to Beijing to discuss the aftermath of the death of Kim and how to continue diplomatic efforts to revive the six-party talks on the North’s nuclear weapons program.

Next week’s talks between Park and Zhang are also expected to touch on future plans regarding the North Korean nuclear issue, the official said.

“Overall issues will be on the table at the talks next week, including the matter of the six-party talks,” he said.

The six-party nuclear talks, which involve the two Koreas, China, Japan, Russia and the United States, have been dormant since the last session in late 2008.

The death of Kim put a brake on a efforts to resume the long-stalled talks. Yonhap