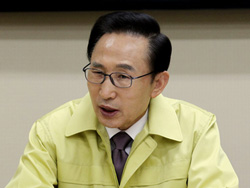 The South Korean government yesterday lifted the emergency 24-hour standby for public servants issued in the aftermath of the death of North Korean leader Kim Jong-il, another gesture to show respect to Pyongyang.

President Lee Myung-bak hosted a National Security Council meeting yesterday morning and lifted the emergency standby call to the civil servants, with the exception of ministries and offices that handle foreign affairs, security and public order.

The emergency standby order was issued at 12:40 p.m. Monday, shortly after North Korean media disclosed that Kim died last Saturday of a heart attack. Under the measure, all government offices were on standby around-the-clock, while security checks at major government buildings were reinforced.

Civil servants were also ordered to refrain from taking vacations or going on business trips as well as participating in year-end parties.

According to Choe Geum-nak, senior secretary for public relations, the government decided to lift the measure after only four days because the security situation on the peninsula was stable. The government was also concerned that the standby, if prolonged, would have a negative impact on the economy at the year-end.

President Lee also returned to his normal routine yesterday and resumed the ministries’ annual reports on their plans for next year. The Ministry of Gender Equality and Family and the Ministry of Health and Welfare reported to the president yesterday.

The government’s decision to quickly go back to routine was seen as another gesture toward the North to improve the frozen inter-Korean relations, because speculation was high that the emergency would continue until Wednesday, when Kim’s funeral ceremony will take place in Pyongyang.

A senior Blue House official said the Lee administration sees the current situation as an opportunity to reset the inter-Korean relations, as Kim, who was considered the culprit behind the sinking of a warship and shelling of Yeonpyeong Island last year, had died.