No accord on condolence delegation

No accord on condolence delegation 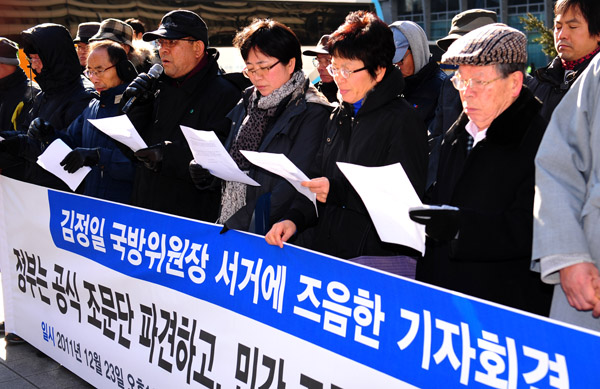 Liberal civic group members urge the South Korean government to allow civilians to travel to Pyongyang in condolence delegations yesterday in a rally in front of the Central Government Complex in Seoul. [NEWSIS]

The widow of former President Kim Dae-jung yesterday failed to reach agreement with the government over whether she could include two politicians in the delegation she will lead to North Korea to mourn the death of Kim Jong-il.

The South Korean government has authorized only two delegations to go to the North: one led by the former first lady, Lee Hee-ho, and a second led by Hyun Jeong-eun, widow of former Hyundai Group Chairman Chung Mong-hun. They said this was reciprocation for the North sending delegations to the funerals of Kim and Chung. 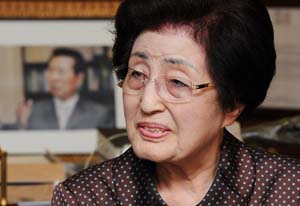 North Korea officially invited the two widows Thursday through the official dialogue channel in Panmunjom, reversing an earlier announcement that it would not allow foreign representatives to attend Kim Jong-il’s funeral.

Hyun finished negotiations with the Ministry of Unification on the date of her trip and the number of people in her delegation. The 90-year-old widow wants to bring two former allies of her husband, Park Jie-won, former floor leader of the Democratic Party, and former Unification Minister Lim Dong-won.

The government does not want any politicians, civic groups nor ordinary citizens to visit the North.

“Mrs. Lee feels she needs someone to help her when she has conversations [with North Korean officials],” Choe Gyeong-hwan, an aide of Lee told the Korea JoongAng Daily in a telephone interview yesterday. “She feels anxious about the idea of being accompanied by only working-level government officials.”

North Korea’s propaganda Web site Uriminzokkiri yesterday posted an editorial condemning the South’s ban on ordinary citizens going to the funeral. It said it welcomed any South Korean during the 11-day mourning period. “We will courteously accept any South Korean delegations or representatives who hope to pay a condolence visit,” the editorial read. “We have taken steps opening all air and land routes.”

The site described the government’s ban an “unforgivable, barbarian act against humanity.”

“The South Korean government should ponder the grave impact of its reaction,” it continued. “The South’s reaction will determine if the inter-Korean relationship will be resolved or completely ended.”

“We have no changes in our initial decision,” Choi Boh-seon, spokesperson of the ministry, told reporters at a briefing. “We haven’t received any official message through the cross-border channel in Panmunjom demanding a widening of the type of delegations allowed to go to the North.”