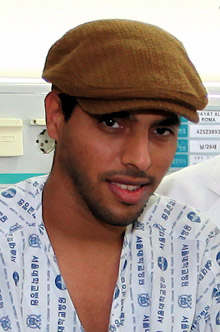 “It’s hard for me to talk to other people because I can’t speak any louder,” Al Romaithi told the doctor in a weak, husky voice.

Al Romaithi was born premature and spent three months in an incubator, which he believes is the cause of his hoarse voice.

Kwon conducted a voice test and a laryngoscopy to get a view of Al Romaithi’s vocal folds and found out that a piece of the cartilage at the back of the cords was misshaped. As a result, Kwon explained, a gap was created when the vocal cords close, resulting in a husky voice.

“When a baby is kept in an incubator, a endotracheal tube is inserted into the baby’s throat to help it breath,” Kwon said. “I think the patient’s vocal cords were damaged at that time. I am considering performing surgery to reconstruct his damaged vocal cords.”

Hearing the doctor’s diagnosis, Al Romaithi raised both arms in the air in joy.

“I visited Korea once in July for a holiday and I had a great impression of this country,” said Al Romaithi. “I am very satisfied with this medical visit. The hospital has been explaining everything to me in detail and the schedule proceeded without delays.”

Al Romaithi is the first patient to come to Korea after the Ministry of Health and Welfare signed an agreement with the health authorities of Abu Dhabi late last month to enable its patients to be treated at four major hospitals in Korea including Samsung Medical Center, St. Mary’s Hospital, Asan Medical Center and Seoul National University Hospital.

Abu Dhabi, the capital of the UAE, relies heavily on foreign medical treatment. According to its health authority, it sends about 3,000 patients a year to countries such as England or Germany to be treated for problems that can’t be treated at home. The Abu Dhabi Health Authority bears all expenses. And as the reputation of Korean medical technology reached European levels, countries are now starting to send their patients here.

The Health Ministry forecasts the revenues from the deal with Abu Dhabi will reach 60 billion won ($52 million) a year. It says it hopes the deal will be a stepping stone to creating “a new Korean Wave in the medical sector.”

Health authorities in Dubai, which also send about 1,000 patients overseas for medical treatment every year, is reported to be considering signing a similar deal with Korea.

“We plan to launch a K-Medicine boom in the Middle East like the construction boom of the 1970s,” said Jung Ho-won, director of health industry policy at the Ministry of Health and Welfare.