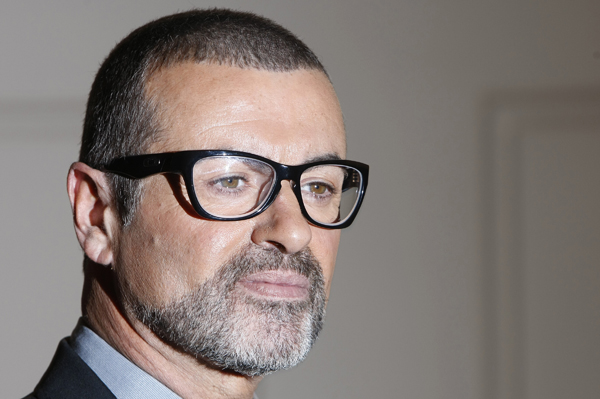 LONDON - George Michael appeared outside his North London home Friday and acknowledged that he had nearly died during his monthlong battle with pneumonia.

“It was touch and go for a while,’’ said the singer, who appeared to have lost weight during his month in a hospital in Vienna. He fought back tears and seemed short of breath.

“They spent three weeks keeping me alive basically. I don’t want to take you through all of it because some of it I want to protect my family from and I’m sure I’ll get it all written down, but it was by far the worst month of my life.’’

The solo star and former “Wham!’’ frontman said his staff had played down the severity of his illness to avoid alarming his fans.

He implied that he had been in a coma when he talked about having “woken up’’ 10 days ago.

The singer also revealed he had undergone a tracheotomy while in the hospital.

Michael was rushed to AKH Hospital in Vienna late last month after canceling a performance in the Austrian capital. He was released from the hospital Thursday.

During his hospital stay, some London newspapers reported that he was gravely ill even as the singer’s publicists said he was improving. Very few details were released, although Michael’s doctors did say publicly he is not suffering from any underlying medical problems.

Michael, 48, ended his appearance Friday after about 10 minutes. He seemed too weak to continue, and also appeared to be overcome with emotion as he thanked the medical staff for saving his life.

“I had streptococcal-something pneumonia,’’ he said, trying to make light of the situation, which forced him to cancel an extensive European concert tour. “I spent 10 days since I woke up thanking people for keeping me alive in the ICU.’’ AP