Not just flavor of the month

Not just flavor of the month

Korean consumers traditionally prefer to stimulate their appetites with spicy red soups, and instant noodles have been no exception - until now.

The national love of gochujang, or spicy pepper paste, has helped instant-noodle pioneer Nongshim maintain its grip on Korea’s national ramen market to such an extent that the company made little fuss when two new rivals hit the shelves this summer. Its main contention was that neither Samyang Food’s Nagasaki Champong nor Paldo’s Kkokkomyeon noodles posed a serious threat as they both made the mistake of trying to turn the nation’s legion of ramen eaters on to white-soup variants.

This seemed a fair enough bet as Nongshim’s Shin Ramyun has held its No. 1 position in the ramen market for a quarter of a century since it was first released back in 1986. The company assumed that, at worst, the white soup fad would be a flash in the pan. 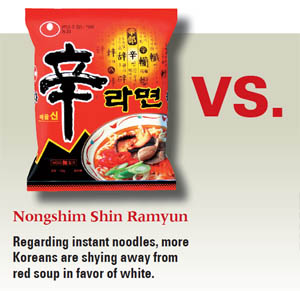 As it turns out, the executives at Nongshim were horribly wrong, and the two new market players are enjoying tremendous popularity throughout the country and changing the landscape of the local ramen market.

The emerging trend has even caused an upset at the traditional Korean equivalent of fast food restaurants, where people pop in for snacks like gimbap (rice rolled in dry seaweed) , tteokbokki (chopped spicy rice cakes) and instant ramen. Many have now put up message boards on their doorsteps that read “Kkokkomyeon and Nagasaki Champong available.”

“We added the two new ramen to our menu at the request of our regular customers,” Lee Soon-ja, a 48-year old worker at Gimbap Cheonguk (Gimbap Heaven) in Daechi-dong, southern Seoul. “The funny thing is, we never received any complaints for only serving Shin Ramyun as our sole ramen for the last decade. So it’s amazing that people’s tastes, which seemed fixed in stone, have suddenly changed.”

According to Homeplus, a discount store retail chain owned by Britain’s Tesco, Shin Ramyun made up 14.8 percent of its monthly ramen sales in July, followed by Nongshim’s Olive Chapagetti (7.9 percent) and Neoguri Spicy (6.8 percent).

While Shin Ramyun was still No. 1 in November sales at Homeplus with 14.4 percent, however, the two white soup ramen were catching up fast, with Kkokkomyeon accounting for 10.9 percent of ramen sales ahead of Nongshim.

“Kkokkomyeon and Nagasaki Champong are growing fast in the market,” said Caley Lim, an official at Homeplus. “The two products broke the 10 percent mark in terms of monthly sales last month ... and we believe the two products will continue to grow in popularity.”

Offended by the statistics, Nongshim officials argued that E-Mart only based their calculations on sales of bundled packets of five ramen and did not include individual packet sales.

“Shin Ramyun is still the No.1 selling ramen at three discount chains when bundled and individual packets are counted,” said an official at Nongshim.

But industry observers say the shifting landscape is still significant.

“Five-packet bundles are the most popular instant noodle item at discount chains,” an E-Mart official said. “This is more proof that customers are migrating over to white soup ramen.”

Samyang Food’s Choi Nam-seok said the company produces 700,000 packets of Nagasaki Champong per day but that even this cannot meet customers’ skyrocketing demand. 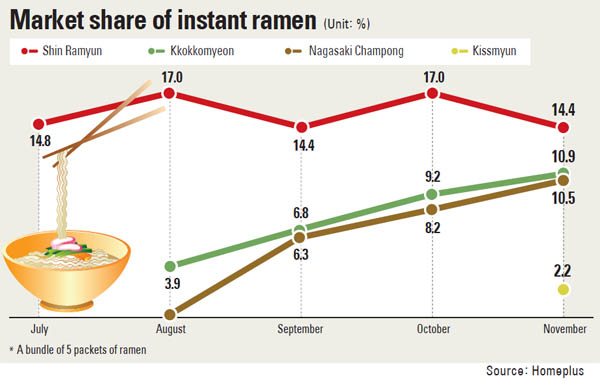 Since it debuted at the end of July, a total of 53 million packets of Nagasaki Champong have been sold as of November. Choi said the product will be exported to Japan from next month.

Meanwhile, Paldo spokesperson Im Min-uk said that over 60 million packets of Kkokkomyeon were sold by the end of November. It will also be exported to the U.S., Australia and Japan starting January. Samyang ranks as the market’s No. 2 player and Paldo is No. 4.

Not wishing to be left out in the cold, No. 3 brand Ottogi launched Kissmyun as a Chinese chicken soup noodle in November. And Nongshim jumped into the fray by releasing Gomtang, a cup-sized white soup noodle with Korean beef, on Dec. 14. Industry sources suspect Nongshim did this to avoid directly competing with its hottest rivals, a claim it denies.

Meanwhile, some Korean media reported earlier this month that Nongshim’s food researchers recently completed preliminary testing for a white soup ramen based on Japanese shabu-shabu, but that the idea to commercialize it was turned down by executives, who argued that Nongshim should stick to red soup.

Yoon Sung-hak, an official at Nongshim, refused to confirm the news report but said that “all possibilities [including whether to release white-soup ramen] remain open.”