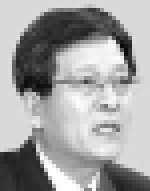 On the eve of the imprisonment of Chung Bong-ju, co-host of a popular podcast dedicated to taking potshots at President Lee Myung-bak, the social networking services are once again buzzing over the former lawmaker’s conviction, and liberal politicians are jumping on the bandwagon to use his popularity.

On Thursday, the Supreme Court sentenced Chung, one of four co-hosts of the “Naneun Ggomsuda” or “I’m a Petty-Minded Creep,” to one year in prison for violating the election law by spreading false rumors against then-presidential candidate Lee during the 2007 election.

Following the ruling, the prosecution sent its first request to Chung to show up to be imprisoned by 5 p.m. Thursday, but he ignored the notice. The second notice for his appearance by 10 a.m. Friday was also ignored, and after a third request, Chung informed the prosecution he would show up by 1 p.m. today.

His supporters, including his podcast co-hosts, said they will plan a big farewell party in front of the Seoul Central District Prosecutors’ Office. Chung will be transported to Seoul Detention Center to serve his term.

Influential politicians posted messages to cheer Chung up. Representative Chung Dong-young of the Democratic Unity Party, who was defeated by Lee in the 2007 presidential election, told CBS radio on Thursday that he had asked Chung to run in the liberal party’s leadership election from jail.

Representative Park Young-sun, who announced a bid to run in the DUP election on Friday, said she was inspired by Chung’s conviction and would fight against the Lee administration for the sake of justice in Korea.

Seoul Mayor Park Won-soon also posted a Twitter message Saturday that read, “I have telephoned Chung to console him, and he was very confident, telling me that he had recorded a ‘Naneun Ggomsuda’ episode,” Park wrote.

SNS users have bewailed the court’s ruling since Thursday and Supreme Court Justice Lee Sang-hoon, who was the presiding judge in the case, became their target.

Gong Ji-young, author of the novel “Dogani,” posted a message on her Twitter account that read, “The death bell, which is signaling the death of Korea’s legal conscience and rationality, is ringing.”

Thousands of Twitter posts criticized the Supreme Court and the justices who participated in the trial.

“We should remember all the judges who gave the guilty verdict to Chung: Lee Sang-hoon, Jeon Soo-an, and Yang Chang-soo,” read one.

“It’s totally wrong to criticize someone because he has a different perspective on an issue,” said Seung Jae-hyun, a law professor at Sungkyunkwan University. “SNS are becoming an outlet to express anger without rationality.”