The North’s most important general

The North’s most important general 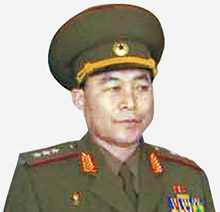 When Pyongyang released the names of the people on the committee organizing the funeral of Kim Jong-il, experts scrutinized it as a map to the inner circle of new leader Kim Jong-un.

The first three names on the 232-person list were unsurprising: Kim Jong-un, Kim Yong-nam, the nominal head of state, and Premier Choe Yong-rim.

Ri’s prominence highlights the fact that the military will continue to have a central role in Pyongyang - and possibly a larger role than when Kim Jong-il was alive. But he also may play the role of a guardian protecting the new, young leader.

Born in 1942 - the same year as Kim Jong-il - Ri grew up in Tongchon, Kangwon Province, in North Korea, the same hometown as the late Hyundai Group founder Chung Ju-yung. In September 2003, Ri was appointed lieutenant general of the Army and was promoted to general in 2009. Just a year and half later in September 2010, he became vice marshal of the Army and the vice chairman of the Central Military Commission, holding equal rank as Jong-un.

Experts speculate that his speedy promotion was related to the succession plan for Kim Jong-un, who made his first public appearance at that time.

When Ri was lieutenant general, he was in charge of tightening security in Pyongyang, a critical job that Kim Jong-il assigned only to someone he completely trusted. He also commanded the military parade marking the 75th anniversary of the Army in 2007.

When Ri was made general in February 2009, Ri was also made the Army’s chief of staff, replacing Kim Kyok-sik.

Kim Kyok-sik was sent to the strategically important city of Haeju, South Hwanghae Province, on the Yellow Sea, as commander of the Fourth Army Corps, which oversees the western frontline. He is suspected to have directed the torpedoing of the South Korean warship Cheonan in March 2010. But Kim, who was considered one of the closest confidants of Kim Jong-il, did not make it onto the funeral committee.

On Sept. 28, 2010, when North Korea convened its first parliamentary meeting in 44 years, Ri was appointed co-vice chairman of the National Defense Commission with Kim Jong-un. The post was created for Ri and Jong-un.

Among the five members of the bureau, Ri is the only person with military and the political responsibilities. Jong-un hasn’t been included in the bureau yet.

Since then, Ri has become prominent. In a the picture taken on Sept. 30, 2010, to mark a meeting of the Workers’ Party, Ri sits between Kim Jong-il and Kim Jong-un. Since then, the seat next to Kim Jong-il has been occupied by Ri.

“Ri seems to have taken the role played by O Chin-u, the late defense minister, in the 1970s,” said An Chan-il, a defector-turned-researcher in South Korea. “In his suit, Ri physically resembles Kim Chaek, a communist guerrilla close to founder Kim Il Sung, which helps Kim Jong-un remind people of his grandfather.”

Ri’s military branch is artillery, another thing he shares with Jong-un, who is reportedly enthusiastic about artillery and may have directed the shelling of Yeonpyeong Island. Sources familiar with North Korean affairs also say that Ri could be allies with with Defense Minister Kim Yong-chun, who has a close relationship with China.

South Korean analysts say Ri’s political stance is hardline, given the fact that the sinking of the warship Cheonan and the artillery attack on Yeonpyong Island occurred after he was chief of staff. But some say Ri could be moderate.