Baek looks to bounce back with Buffaloes

Baek looks to bounce back with Buffaloes 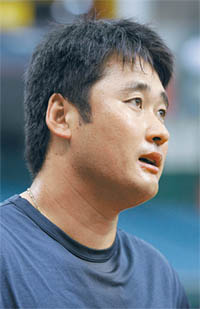 Park and Lee returned to Korea and signed with the Daejeon Hanwha Eagles and the Daegu Samsung Lions, respectively. In order to fill their void, the Buffaloes have brought on two Busan-born players.

While Lee Dae-ho, former Busan Lotte Giants power hitter and the 2010 MVP of the Korea Baseball Organization, has signed a two-year contract worth of 760 million yen ($9.7 million) and received his fair share of the spotlight, former MLB pitcher Baek Cha-seung is a different story.

The 31-year-old Baek signed a one-year deal worth 40 million yen, almost one-ninth of Lee’s deal. In fact, unlike Lee, he had to try out to wear the Buffaloes uniform.

Baek was a top pitcher in the late 1990s. However, after disobeying a manager’s order during the 1998 Asian Junior Baseball Championship, he was expelled permanently from the Korea Baseball Association. The suspension forced Baek to continue his baseball career outside Korea.

He signed with the Seattle Mariners in 1999 and, in 2005, he received his U.S. citizenship, which was a big disappointment to some Korean fans,

The right-hander pitched for the Mariners until 2008 and then went to the San Diego Padres. However, his performance wasn’t consistent as an elbow injury continued to bother him. Last year, Baek played for independent league teams such as the Yuma Scorpions and Orange County Flyers to continue his baseball career.

But in an interview with Ilgan Sports, the JoongAng Ilbo’s daily sport newspaper, Baek said he is now ready to bounce back with the Buffaloes.


Q. Your situation a year ago was much different. What has changed?

A. One year has passed already. Back then, I felt very difficult because I wasn’t affiliated with any clubs. But now, I have a club to pitch for. While going through rehab last year, I became determined to make a comeback.

Was there any special order from manager Akinobu Okada?

He told me to prepare thoroughly because I will be competing for a spot in the starting rotation. In fact, my original goal was to play as a starter. I don’t want to give up a lot of runs and miss the rotation. I know the competition will be tough.

How are you training these days?

Right now I’m trying to strengthen my stamina because in order to be in the starting rotation you need to have good stamina throughout the season. From 7 a.m. to 12 p.m. I do basic cardio training and from 1 p.m. to 4 p.m. I lift weights. I will start pitching next January.

Did you talk with Lee Dae-ho before?

I talked with him on the phone. He told me he feels good since we are in the same club. Both of us are having our debut season in Japan. I want us to help each other and rely each other to have a good season.

Is there a special meaning to your number (No. 99)?

Actually there were limited numbers I could have selected, but No. 99 just caught my eye. Since my last name is Baek [which is 100 in Korean], I wanted to select 100 as my back number but players can’t select three-digit numbers.

What did you do over Christmas weekend?

I watched the baseball movie “The Perfect Game.”