Park in tough spot for Arsenal

Park in tough spot for Arsenal 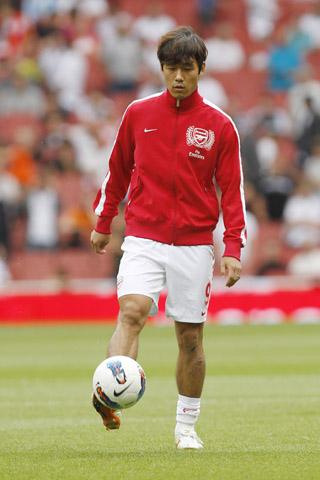 Will Korean striker Park Chu-young get a chance to play in the English Premier League before the end of this year?

Park, who took the Arsenal uniform in August after moving from French side AS Monaco, has not played in a league game so far. For the last four months, the 26-year-old only played in three Carling Cup matches and one match in the UEFA Champions League. He has one goal in those four games, which came in the Carling Cup match against the Bolton Wanderers on Oct. 25.

As EPL clubs enter the Boxing Day period starting today, in which clubs play at least three matches until the first week of next year, many Korean fans expect Park to get a chance to play in the league matches, because teams have to efficiently use players with their tight schedules.

Arsenal, currently fifth in the league table with 10 wins, two draws and five losses, hosts the Wolverhampton Wanderers tomorrow and the Queens Park Rangers on Saturday before facing Fulham FC away.

And as Moroccan striker Marouane Chamakh and Ivorian forward Gervinho wait to be called for their national teams in the Africa Cup of Nations in January, Park was expected to get his opportunity to make a debut for the league game.

However, the situation is becoming grim for the Korea national team captain as Arsenal manager Arsene Wenger said on Saturday that he is considering bringing back their former star Thierry Henry to the London club on a two-month loan deal from the New York Red Bulls in the U.S.

Henry, 34, has been training with the Gunners since the close of the U.S. Major League Soccer season in November and recently had a statue of him unveiled at the Emirates Stadium to mark his legendary status at the club.

Henry, who left Arsenal for FC Barcelona in 2007, is the all-time goal scorer for the franchise, netting 226 goals in 369 matches during his eight seasons. He also scored 14 goals for the Red Bulls this MLS season.

Wenger revealed on the club’s official Web site that he hasn’t yet made his decision, but is considering bringing the Frenchman back to London.

“That’s why I have Christmas Day off - I have to think about that,” Wenger was quoted on his club’s Web site. “The first of January is the vital date for us. We have seven days to make decisions and I will make a decision in the next seven days on players.”

Besides Henry, according to the media reports, Arsenal is linked with German attackers Lukas Podolski of FC Koln and Mario Gotze of Borussia Dortmund. Most recently Colombian striker Hugo Rodallega of Wigan Athletic was rumored to be of interest to the Gunners as well.

Some Korean football pundits said that with the league’s top striker Robin van Persie, who has netted 16 goals, standing as the club’s favorite starter for Arsenal, Park has to perform well and step up as the possible second choice striker for Arsenal when other fellow strikers are out of the roster, but as Wenger is poised to sign a new striker, it could be tougher time for Park next year. Pundits also pointed out if Park can’t play enough games for his club, it can also affect his performance on the national team.