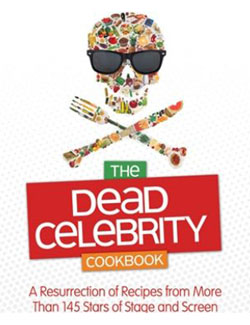 LOS ANGELES - Comedian Frank DeCaro is best know n for his stint on “The Daily Show with Jon Stewart” but the comedian and talk radio host is now dishing out recipes.

In his third book, “The Dead Celebrity Cookbook: A Resurrection of Recipes From More Than 145 Stars of Stage and Screen,” DeCaro provides the ingredients for actress Mae West’s fruit compote and comedian John Ritter’s favorite fudge along with other recipes from deceased stars.

The 49-year-old performer spoke to Reuters about his inspiration for the book, how he found the recipes and which are his favorites.


Q.Where did the idea for the book come from?

A. When I was at Northwestern University in the early 1980s, my friends threw a “dead celebrity” party. All the guests came dressed as stars who had gone to the great studio commissary in the sky. Everyone from Adam and Eve to Sid and Nancy were at that party. Our host was dressed as Judy Garland and carried a pill bottle that read “Take until dead.” It was one of the best parties I’ve ever been to. We didn’t have any “dead celebrity” food at that party, though, and that sort of planted the seed for the “Dead Celebrity Cookbook.”

There are over 145 recipes. How did you get them?

Ever since that party, I’ve been collecting out-of-print cookbooks, supermarket flyers, spiral-bound manuals that came in microwave ovens in 1975, old magazines - anything that has a celebrity recipe in it. I curated the recipes from those sources, borrowing the lists of ingredients and rewriting the instructions so they made sense for modern home cooks.

Do you know if any of these celebrities actually cooked the dishes?

I certainly think they enjoyed them, even if someone else did the cooking. [Michael] Jackson was said to love sweet potato pie. Who doesn’t? Gary Coleman’s recipe [chicken vegetable soup] had a note attached that suggested it was one he grew up eating. As for Miss Crawford, I’d very much like to believe Joan poached her own salmon, if you’ll pardon the expression.

How did you decide to organize and categorize them all?

In a way that made sense to me as a lover of pop culture, and in a way in which readers could best appreciate the celebrities themselves and the amazing work they did while they were alive.

Have you baked any of the recipes yourself?

I taste-tested about a third of them, some of are really delicious; some, not so much.

Do you have a personal favorite?

Liberace’s sticky buns! I made 24 of them and ate nine before they were cool enough to handle. They’re so good!

Who is this book for? Movie and TV buffs, food-lovers, pop culture aficionados, those who collect Hollywood memorabilia or your gay best friends?

I did this book for home cooks with a sense of humor. Pop culture junkies will love the chance to reminisce about stars. But really, I wrote it for people who don’t know who these celebrities are: younger readers, for instance. I hope they discover these stars and their work through this book.

Any plans for follow-up cookbooks?

This is only the first in what I hope will be a series of “Dead Celebrity Cookbooks.” It may have an irreverent title, but the book is a love letter to the stars.