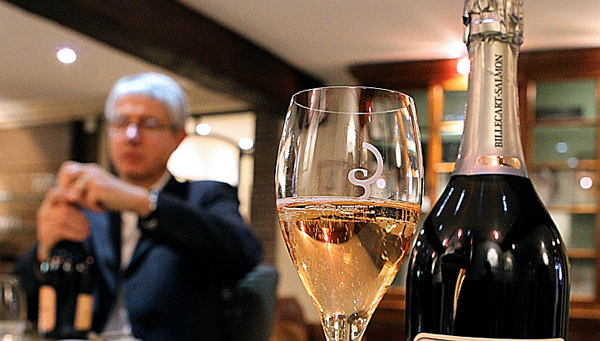 First seen as a quirky variation on classic white bubbly - even dismissed as a ‘woman’s drink’ - rose champagne has grown into far more than a fad, with a market share that has been rising steadily for 10 years. [AFP/YONHAP]


Do you take your champagne brut or rose? Around the world the French sparkling wine is still the ultimate festive drink, but these days it often comes in shades of golden pink to pomegranate.

First seen as a quirky variation on classic white bubbly -- even dismissed as a “woman’s drink” -- rose champagne has grown into far more than a fad, with a market share that has been rising steadily for 10 years.

All of France’s top champagne houses have started offering rose, and the northeastern growing region is producing ever more of it, according to Thierry Gasco, cellar master at Pommery.

“More and more wine lovers, including men, have accepted rose in its own right,” said Gasco.

For 26 years Francois Domi has run the cellars at Billecart-Salmon, a 19th-century champagne producer which sells 1.5 to two million bottles, 60 percent of them exported, and whose rose has secured a global reputation.

On a tour of the house cellars in Mareuil-sur-Ay, Domi explained why in his view rose champagne has an advantage over white: “It adds colour to the table -- and it softens the image of champagne, it makes it more genial.”

Rose accounts for less than a third of production at Billecart-Salmon, made from the three main grapes of the champagne region: chardonnay, pinot noir and pinot meunier.

Wine producers are banned by European Union law from mixing red and white wines to produce rose, which has to be made by the traditional method of leaving crushed red grape skins to soak with their juice.

Champagne is the exception: here rose is made by mixing in red wine, less than 10 percent in the case of Billecart-Salmon.

Domi doses the red wine until he achieves just the right colour and aroma, nothing too tannic, the aim being a champagne with a slight hint of dried fruit and strawberry.

A handful of champenois winegrowers -- a tiny minority -- choose to make their rose by steeping grape skins in juice, known as the “saignee” method from the French word for bleeding.

The result, says Domi, is a wine with “more power, where the aromas are more pronounced, more striking.”

Billecart-Salmon, whose rose champagne is seen by sommeliers as one of the best, prefers to put the accent on “subtlety, delicacy” -- but the bleeding method has its fervent advocates.

One of them is Jean-Baptiste Geoffroy, whose nearby vineyard produces 120,000 bottles per year, 20 percent of them rose, against a regional average of eight to 10 percent.

Made 100-percent from pinot noir grape, his deep-coloured rose aims for something “scrumptious, explosive, with notes of red berry.”

“When it’s young, a rose has to have punch,” said the 40-something winegrower -- who believes the bleeding method enables him to get “more of the fruit” from the grape.

“What bothers me with blended roses is that many are -- to the taste -- near-identical to white champagnes.

“And when you mix white with red, you never achieve perfect unity. The touch of tannic red lacks harmony with the white”.

But he admits his method sometimes catches tasters off guard. “Either they love it, or they hate it -- especially if they expect a rose that tastes either like white, or very light.”

It is obtained by macerating light-skinned chardonnay and dark-skinned pinot noir grapes together, instead of macerating each grape separately then dosing the mix -- the standard method for almost all champagne and wine production.

“No one had tried it before,” Geoffroy smiled. The result? A floral, mineral wine with hints of exotic fruit.