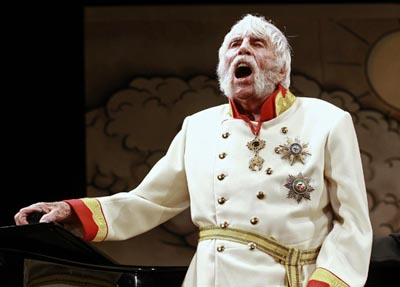 BERLIN - Dutch-born entertainer Johannes Heesters, who made his name performing in Adolf Hitler’s Germany and was dogged later in his long career by controversy over his Nazi-era past, died Saturday, his agent said. He was 108.

The tenor Heesters made his debut on the big stage at the Volksoper in Vienna in 1934. His career took off in Berlin where, starting in 1935 - two years after the Nazis took power - he became a crowd favorite at the Komische Oper and Admiralspalast.

He gained fame by appearing in films such as “Die Leuchter des Kaisers’’ (“The Emperor’s Candlesticks’’) and “Das Hofkonzert’’ (“The Court Concert’’).

Despite his popularity in the Third Reich, Heesters was never accused of being a propagandist or anything other than an artist willing to perform for the Nazis, and the Allies allowed him to continue his career after the war, when he took Austrian citizenship.

Heesters died early Saturday at the hospital in the southern city of Starnberg, where he had been cared for while being in critical condition for several days, his agent Juergen Ross said.

In Heesters’ native Netherlands - which was occupied by Germany for most of the war - some viewed him as irredeemable given his appearances under the Nazi regime.

In February 2008, he braved protests to perform in the Netherlands for the first time in 44 years at a theater in his native Amersfoort.

In his previous attempt, in 1964, he was booed off the stage in Amsterdam when he tried to appear as the Nazi-hating Captain Von Trapp in “The Sound of Music.’’

Heesters said it gave him a “heavy heart’’ to know he was “not wanted in my homeland.’’

“What did I do wrong? Sure, I acted in films in the Third Reich, entertainment films, which distracted countless people inside and outside Germany from daily life during war,’’ he wrote later about the reception he received.

“Sure, I wanted to make my career and I remember well at the time how many people in the Netherlands were proud that I made a career in the huge neighboring country,’’ he added. “But apart from my career - and the fact that, through no fault of my own, Adolf Hitler was one of the fans of my art - what have I done?’’

Critics focused on a visit Heesters made to the Dachau concentration camp in 1941.

In December 2008, Heesters lost a court attempt to force a German author to retract allegations that he sang for SS troops there.