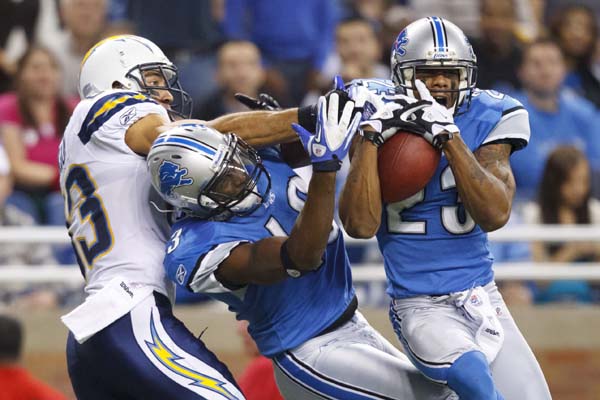 
They’re back, for the first time in 12 years, earning an NFC wild-card berth by beating San Diego 38-10, knocking the Chargers from contention Saturday.

“This is an accomplishment,’’ coach Jim Schwartz said. “It’s a big step for our team and our organization.’’

Detroit (10-5) plays at NFC North champion Green Bay next Sunday before going on the road in the wild-card round.

New England, which already owns the AFC East title, grabbed a first-round bye with a 27-24 comeback victory against Miami. The Patriots (12-3) will have home-field advantage throughout the AFC playoffs if they beat Buffalo next week.

“It’s good to clinch,’’ said Deion Branch, who caught a touchdown pass from Tom Brady, “but not by the way we played. It’s not the way you want to do it.’’

The Dolphins led 17-0 at halftime before New England stormed back.

The New York Giants beat the local rival Jets 29-14 to tie Dallas at 8-7 atop the NFC East. The Cowboys, who lost 20-7 to Philadelphia, visit the Giants next Sunday night, with the winner taking the division, the loser going home.

Cowboys quarterback Tony Romo missed most of Sunday’s game with a bruised right hand as Dallas got within 7 seconds of being shut out.

“We need to be as healthy as we can be next week,’’ coach Jason Garrett said.

The Giants virtually ended the Jets’ shot at the AFC playoffs in a sloppy game.

“Given everything that was at stake, and all the noise that has been coming out of Florham Park,’’ Giants co-owner John Mara said of the Jets’ bragging all week that they were the better team, “yeah, it means a little more.’’

Denver’s 40-14 loss at Buffalo dropped it into a tie atop the AFC West with Oakland, which beat Kansas City 16-13 in overtime. Still, if the Broncos (8-7) beat Kansas City in Denver next Sunday, they take the division.

“Everything is still on the table,’’ quarterback Tim Tebow said. “We have to go and execute and play a little better. Hopefully, we can get in the tournament.’’

The Raiders get in if they defeat the Chargers in Oakland and the Chiefs beat the Broncos.

“The man told me, ‘Hue, we’ll win it in the end.’ I believe that,’’ said Raiders coach Hue Jackson, reflecting on a conversation he had with Al Davis before the Raiders owner died in October.

Baltimore and Pittsburgh remained atop the AFC North at 11-4, with the Ravens holding the tiebreaker after sweeping the Steelers. Baltimore beat Cleveland 20-14 and Pittsburgh blanked St. Louis 27-0.