Rose steps up to lift Bulls over Lakers in opener

Rose steps up to lift Bulls over Lakers in opener 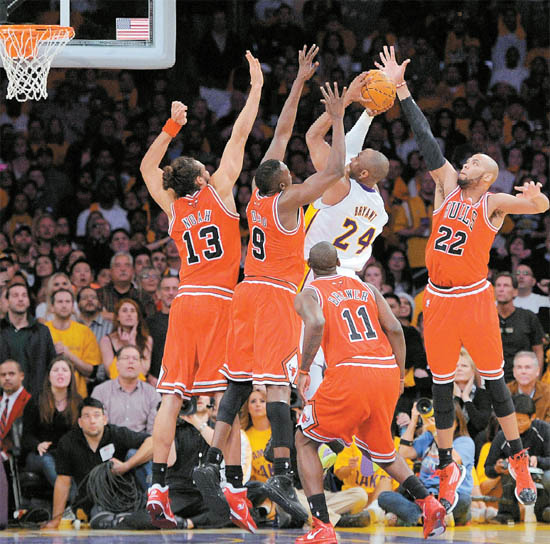 
LOS ANGELES - Derrick Rose scored the go-ahead basket with 4.8 seconds remaining as the Chicago Bulls opened their new NBA season with an 88-87 win over the Los Angeles Lakers on Sunday.

While Rose provided the finishing scoring touch, teammate Luol Deng gave the Bulls the fourth-quarter spark they needed to come from behind in front of a Christmas Day crowd of 18,997 at the Staples Center.

“We showed fight,” said Rose. “We don’t want to be in a situation like that but we got it done.”

Deng scored nine points in the final quarter and intercepted a Kobe Bryant pass then quickly got the ball to Rose who drove to the basket before pulling up and draining a short one-handed lob.

Bryant had a chance to put the Lakers back in front but his jumper from in close was blocked by Deng at the buzzer. “I wanted to crowd him so he didn’t have a jump shot,” Deng said of Bryant.

Rose finished with 22 points and five assists and Deng had 21 points for the Bulls who moved to 7-7 in their last 14 season openers.

“That is just something I am used to doing if I am going to my right hand. They let me get to my right hand and that’s how it got up,” Rose said of the game-winning shot.

Bryant, who is playing with a bandaged wrist to protect a torn tendon, scored a game-high 28 points and Pau Gasol had 14 points for the Lakers who have a 36-16 record in season openers in franchise history.

This was the first time since the start of the 2008-9 season that the Lakers haven’t begun their home schedule with a championship ring ceremony at center court.

Instead Lakers guard and president of the players union, Derek Fisher, took the microphone before the game to talk about the new collective bargaining agreement.

“Everybody wasn’t happy with the process or the finished product but thanks for your support and patience,” Fisher told the crowd.

After almost having to cancel the season, the league and players union agreed on a last-minute labor deal which resulted in a compressed 66-game schedule, beginning with five games on Christmas Day.

Because of the lockout teams have had a little more than two weeks and just two exhibition games to get ready for the season.

Dallas caught fire last year and beat the Miami Heat for the NBA title but the Heat earned a measure of revenge Sunday by holding on to beat the Mavericks 105-94.

In another opening-day game, the New York Knicks edged the Boston Celtics 106-104, while Oklahoma City beat the Orlando Magic 97-89 and the Los Angeles Clippers won over the Golden State Warriors 105-86.

The Lakers are one of the NBA’s most storied franchises but they enter the season with plenty of uncertainty. The biggest concern being the absence of legendary coach Phil Jackson who retired with 11 championship rings.

Fragile center Andrew Bynum is suspended for the first four games of the season while Bryant is playing with a torn tendon in his right wrist.