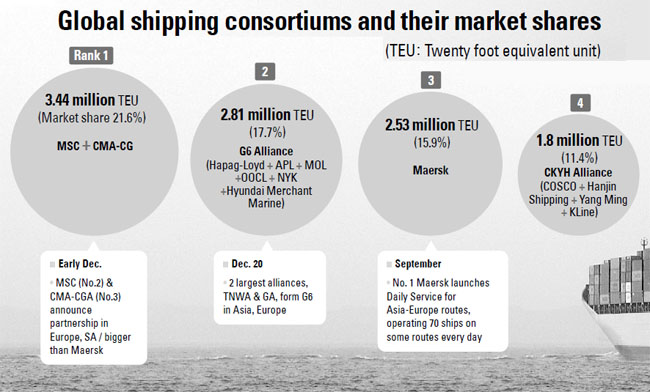 
The global shipping industry is undergoing a transformation this year, with alliances among shippers who were formerly rivals setting new standards for performance in the industry and rallying stock prices.

Thanks to the creation of one such alliance, the G6 Alliance, last Tuesday, the price of Hanjin Shipping shares soared to the limit last Wednesday, closing at 10,450 won ($9.09) per share. The rally followed four consecutive days of falling share prices. Other shipping companies also rallied on the day, with Hyundai Merchant Marine and STX Pan Ocean shares rising 4.5 percent and 8.1 percent, respectively.

The shipping alliances demonstrate unprecedented levels of cooperation across national borders. Individual companies are eager to come under the umbrellas of consortiums due to uncertainties at home and abroad. The main culprit is the prolonged global financial crisis that has triggered decreases in shipping traffic and increases in costs, including high oil prices. Plus, an oversupply in the market caused shipping rates to drop.

Forming consortiums gives struggling shippers the advantage of an economy of scale. Those who haven’t found partners yet are at risk of “sinking” in a sea of uncertainties. 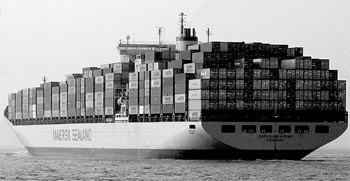 Hyundai Merchant Marine trumpeted the launch of the G6 Alliance last week. The alliance grows from the combination of The New World Alliance (TNWA), which Hyundai has been participating in, and the Grand Alliance (GA) for routes between Asia and Europe. The six global shippers in the alliance will operate over 90 ships on nine routes to Asia from Europe through the Mediterranean Sea. Hyundai’s level of service will double as a result of joining the alliance.

Earlier, the world’s No. 2 shipper, MSC from Switzerland, and No. 3 shipper, CMA-CGM from France, forged partnerships in Europe and South America. The marriage gave them levels of service that far outstripped Maersk, the biggest shipping company in the world.

Maersk, a Danish company that accounts for 16 percent of global shipping traffic, sparked a de-facto “war” in September when it launched “daily service” routes to select ports in Asia and Europe. The move broke the long-held custom in the shipping industry to provide services to ports once a week, increasing tension among global shippers. The MSC and CMA-CGM partnership and the G6 Alliance are a direct response to the Maersk daily service initiative.

The global shipping industry sees alliances as a way to reshape the market. Not only small shippers, but also those with vessels bigger than 10,000 TEU will call for cooperation and create alliances at an accelerating rate, according to industry sources.

Mergers and acquisitions will also be rolled out more aggressively. Experts say shippers that fail to find a mate or group will risk failing. MISC, the 29th-largest shipper based in Malaysia, said it will scrap its container shipment business.

“The current move in the shipping market is to contain the chicken game led by Maersk in the midst of a severe oversupply,” said Yoon Hee-do, an analyst at Korea Investment & Securities. “At the same time, shippers aim to cut operating costs and improve efficiency.”

The analyst added that cooperative efforts could improve conditions in the shipping market faster than expected.