Korean Air’s A380 gamble pays off

Korean Air’s A380 gamble pays off 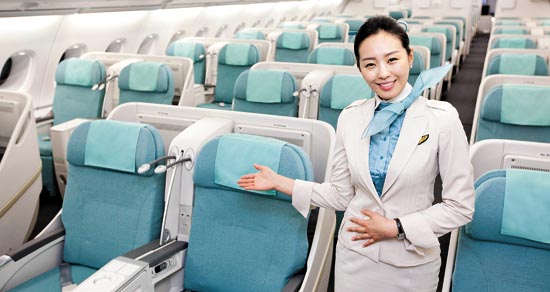 A Korean Air flight attendant introduces the prestige class seats on the carrier’s Airbus A380, which the country’s largest carrier debuted six months ago. Korean Air said yesterday that 400,009 passengers have traveled on its fleet of A380 so far. Provided by the company


More than six months have passed since Korean Air ran its first Airbus A380 flight from Seoul to Tokyo in June, hoping to enhance the airline’s premium image and grab a bigger slice of the global airline industry.

Despite early concerns that the number of passengers was falling short of expectations, however, figures showed yesterday that the fleet of A380s has given the nation’s flagship carrier a significant business boost in recent months.

According to Korean Air, it welcomed 400,009 passengers on its five A380s from June 17 to Dec. 16 over an aggregate flight distance of almost 6 million kilometers (3.7 million miles).

The carrier started offering flights on the world’s largest commercial aircraft to two short-haul destinations - Tokyo and Hong Kong - in June, and gradually expanded its routes to long-haul destinations such as New York, Los Angeles and Paris as it received four more A380s from France-based Airbus.

The airline posted an average occupancy rate of 80 percent for all five destinations.

In the month following its first flights to Tokyo and Hong Kong, however, the occupancy rates were more than 10 percentage points lower than when the airline operated the routes with smaller planes like Boeing’s 747 and 777. 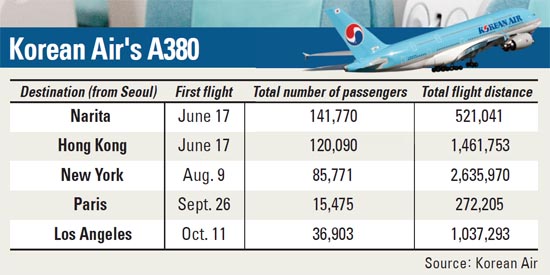 Korean Air blamed this on the increased number of business-class seats available on the A380s compared to other commercial planes, adding that demand for coach seats tends to be higher for short-distance flights. The A380s have 12 first class, 94 business and 301 economy class seats. They also come equipped with a cocktail bar and a duty-free shop.

But the launching of long-haul flights to key destinations in the U.S. and Europe over the summer boosted demand for luxury seats on the fleet, it added.

“The number of passengers traveling on business class seats increased on long-haul routes like New York, LA, and Paris,” an official from Korean Air said.

The official said that19,551 passengers flew business class to these three destinations in 2010 but that this figure rose to 27,636 this year.

In line with the growing demand for its A380 flights, Korean Air will operate 10 of the aircraft by 2014, the airline said. From 2015, it will fly more than 3 million passengers around the world each year, covering a total distance of nearly 26 million kilometers, it added.