Samsung, the Suwon, Gyeonggi-based technology giant, will pay 1.08 trillion won ($935 million) in cash for Sony’s stake in the venture, established in April 2004 to roll out LCD panels for TVs, Samsung said in a regulatory filing after stock markets in both Korea and Japan had closed.

The breakup of the top TV makers from the Korean and Japanese markets should be viewed as “a vivid indicator of the rapid decline in the fortune of LCDs,” a Wall Street Journal report noted.

The LCD business was very lucrative in the mid-2000s, according to the report, but as manufacturers overproduced, there was a chronic shortage of demand even after the rush of mobile gadgets like smartphones and tablet computers.

The breakup is expected to be complete by the end of next month, pending regulatory approval, Samsung officials said.

So, despite their rivalry in finished goods, Samsung and Sony decided to collaborate in terms of technology and supply, establishing S-LCD with initial capital of 3.3 trillion won.

Headquartered in Tangjeong, Korea, the joint venture was tasked with producing large-size LCD panels - mostly in the 40-inch rage - for TVs.

The main reason for the breakup, sources say, is Sony’s failing TV business. Sony, the world’s No. 3 TV maker, is estimated to lose 175 billion yen ($2.2 billion) in the fiscal year that ends next March. That would be the fourth straight annual loss. As the yen reached a postwar high recently, the company halved its midterm sales target for LCD TVs to 20 million a year.

Sony has also been streamlining its main TV operation for some time. According to a Financial Times report as well as other sources, Sony had already begun edging away from in-house production, selling factories in Slovakia and Mexico to the Taiwanese contract manufacturer Hon Hai.

The situation is slightly better for Samsung, which to the market’s surprise, overtook Sony as the leader in the global TV market in 2006. Since then, Samsung has remained the “king” in the TV world for six years straight - maintaining a 20 percent range market share for the last three years.

Even so, Samsung has taken a beating from low demand for LCD TVs in advanced countries like Europe and the U.S. as well as persistently low LCD panel prices. Samsung merged its LCD unit with its semiconductor division earlier this year, in a bid to help facilitate a faster turnaround. 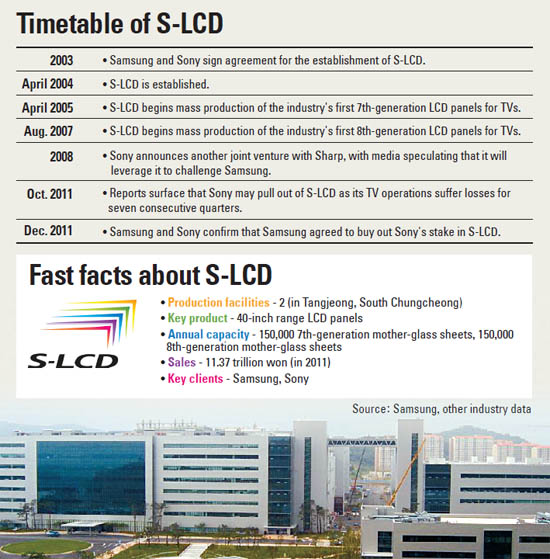 Even though the joint venture will end, “the two companies plan to continue strategic partnerships, and Samsung will keep supplying LCD panels to Sony,” Samsung emphasized in a press release.

And Samsung and Sony - as well as some observers - say that the new “strategic partnerships” would be good for both companies.

For one, Sony will be able to secure cash for its faltering business. It will also be able to secure a flexible and steady supply of LCD panels from Samsung’s S-LCD at market prices. And Sony will no longer have to bear the responsibility and costs of operating the manufacturing facilities, Sony said in a statement.

“Despite this one-time loss, Sony estimates that the transaction will result in substantial savings,” the statement said.

For Samsung, the biggest plus will be that it can now use the production facilities for whatever purposes it deems necessary - like for rolling out panels for laptops or PC monitors, for instance.

“We should be able to operate the production lines of S-line with higher flexibility,” a Samsung official said. “Recently we saw the need to be more agile and active [in our response] to changes in the TV industry as well as the lackluster LCD business.”

Samsung officials said the termination of the joint venture will not affect S-LCD’s plans to build a plant in China, which is slated to start production in 2013.