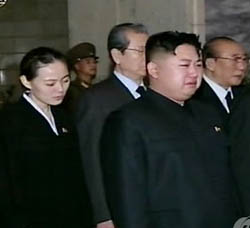 Choe Ryong-hae, a secretary of the North Korean Workers’ Party and a confidant of Kim Il Sung, North Korea’s first president, appears to be solidifying his position as the senior adviser to Kim’s grandson, Kim Jong-un.

Choe’s advance is a reflection of his family’s special relationship with the Kim dynasty and his experience in guiding young leaders.

Although Kim Jong-un’s uncle, Jang Song-thaek, is currently seen as a key power broker for the unexperienced heir, Choe has status in the party as influential as Jang’s. Choe’s ranking in the party is one level higher than Jang’s, at No. 18, and he was also nominated by Kim Jong-il in 2010 to the rank of full general in the People’s Army along with Kim Jong-un. Jang was not included in the list of military promotions.

Experts assumed that Kim Jong-il tried to ease his youngest son’s consolidation of power by calling on the long-time relationship between the Kim dynasty and Choe’s family. Kim Jong-il appointed Choe to be a party provincial secretary in September 2010, when his son made his first public appearance as his father’s designated successor. North Korea watchers have speculated that the former leader wanted to prevent Jang, his brother-in-law, from becoming too much a power behind the throne of Kim Jong-un, who is only in his late 20s.

Choe’s father, Choe Hyon, who died in 1982, was a confidant of Kim Il Sung during the two men’s early years as communist guerrillas, and later served as North Korea’s defense minister. In August 1956, a group of anti-Kim officials publicly lashed out against the founder’s rhetoric at a party’s meeting in an attempt to overthrow him. During this so-called “Factional Incident,” Choe Hyon abruptly entered the conference room and pointed a gun at the plotters, cowing them into submission. After the revolt was suppressed, North Korean officials praised Choe Hyon’s family, calling them a “family of loyalty.”

Sources say Choe’s family lived next door to Kim Il Sung’s residence, so his second-born son Ryong-hae, who was eight years younger than Kim Jong-il, grew up together with the “dear leader.” Kim Jong-il reportedly took care of the younger boy and treated him as a brother.

An overseas Chinese who has met with both Jang and Choe told the JoongAng Ilbo, “While Jang is sneaky and hides his true thoughts, Choe becomes aggressive when he thinks he should, just like his father.”

Thanks to his father’s ties to the nation’s founder, Choe Ryong-hae grew up in elite circles, which North Koreans regard as the most important factor in becoming a politician. He graduated from Kim Il Sung University’s politics and economics department and also studied at Mangyongdae Revolutionary School.

In 1986, when he was 36, he was catapulted into prominence when he was appointed first secretary of the League of Kim Il Sung Socialist Working Youth, North Korea’s incubator for new leaders. He directed the activities of five million members for 12 years. Choe reportedly was popular with many young North Korean officials by telling them, “If you have something to say to me, say it honestly.”

In 1998, Choe was charged with receiving kickbacks and fired as first secretary of the youth organization. The punishment was light; others involved in the bribery case were executed. His work during the next eight years is unknown, but he was appointed secretary of the Workers’ Party in North Hwanghae Province in 2006.

Choe’s view on the North Korean economy is flexible, according to the JoongAng Ilbo’s overseas Chinese source. “He told me, ‘North Korea should revive the civilian economy to stabilize the nation,’?” the man said.

When Choe was posted to North Hwanghae, he reportedly worked hard to stimulate the economy in Sariwon, the provincial capital. Choe reportedly revitalized the Sariwon Department Store and a food processing plant at Mount Chongbang to provide more food for local residents.

Kim Jong-il brought Choe on some of his so-called “field guidance trips” to other provinces; the pair visited North Pyongan, Sinuiju and Chagang Provinces, for example. In North Korean practice, it is exceptional for a provincial party secretary to inspect activities of other provincial parties.

Sources say Kim Jong-il sought Choe’s advice on the national economy as well; Choe is said to have advised Kim on handling the fallout from the troubled currency reform efforts in North Korea, meeting with him in early 2010 to discuss the widespread unrest that followed the “reform.”

“Given his family background and his career, Choe will rise as a key person during Kim Jong-un’s rule,” said Jeon Hyeon-jun, a senior researcher at the Korean Institute for National Unification.