Police to clamp down on altars set up by activists

Police to clamp down on altars set up by activists 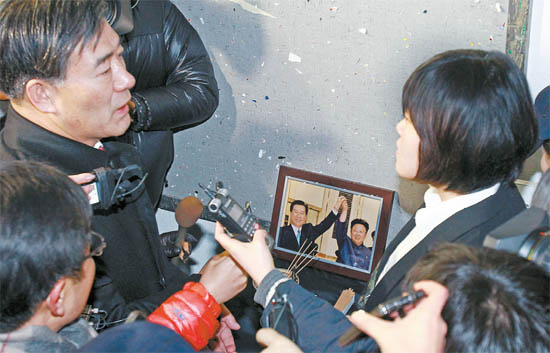 School officials remove an altar for Kim Jong-il set up by some students on the campus of Seoul National University yesterday. By Kang Jung-hyun


Some far-left civic and student groups in the South are attempting to set up altars to pay tribute to Kim Jong-il. The police in the South have vowed to sternly deal with these groups.

“Setting up a tribute altar for Kim amounts to inspiring citizens in the South to commit pro-North Korean activities as well as praising the North Korean regime, which are both punishable crimes under the National Security Law,” said an official of the Seoul Metropolitan Police Agency.

“We will try to restrain them even if it requires the use of force.”

Yesterday, a group calling themselves the victims of the National Security Law said they would set up an altar in front of the Daehan Gate, part of Deoksu Palace in central Seoul, later in the day to pay tribute to Kim. The police counteracted the group’s plan by saying that a conservative civic group had already gotten approval to hold an assembly at the same place at that time.

The group is comprised of people who have been previously charged and convicted of creating pro-North Web sites. It also runs a pro-North Internet cafe.

Some students at Seoul National University also put up an altar to Kim inside their campus in Sillim-dong, southwestern Seoul, yesterday, before it was scrapped 10 minutes later by school officials.

A 22-year-old female student surnamed Park and her two male colleagues at SNU’s College of Agriculture & Life Sciences used a bundle of chrysanthemums, a desk and an incense burner to set up a makeshift altar in front of a cafeteria. Immediately after the students left the scene, several school officials removed the altar.

“When President Kim Il Sung died, we had a confiscation warrant issued and cleared all altars set up for him within the campus [of SNU],” said a police official.

The police are also looking at an alleged illegal border-crossing by a leading activist of another South Korean civic group. The group, known as the Korea Alliance for Autonomous Unification and Democracy, yesterday claimed that one of its leaders, Hwang Hye-ro, 35, went to Pyongyang from her residence in France via Beijing last Saturday to pay respect to Kim Jong-il.

The police are considering seeking criminal punishment for a breach of the National Security Law.

Seoul has approved the passage into the North to only two groups of private mourners from the South.

The groups, each led by Lee Hee-ho, the widow of former President Kim Dae-jung, and Hyundai Group Chairman Hyun Jung-eun, went to the North yesterday and will return today.

In the past, the North sent delegations to the South to attend the funerals of both Kim Dae-jung, who had the first inter-Korean summit with Kim Jong-il in 2000, and Chung Mong-hun, Hyun’s husband and former Hyundai Group chairman, who launched a now-stalled inter-Korean tourist project at Mount Kumgang in the North.

The North has said a 13-day mourning period for Kim will run through Thursday. The official funeral service is tomorrow.