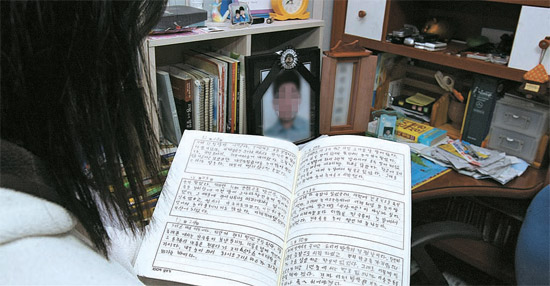 “The fact that I didn’t know anything about my son’s pain tears my heart with sorrow,” the boy’s mother told the JoongAng Ilbo on Saturday.

The boy jumped from his apartment balcony, seven floors above ground. He left a four-page suicide note detailing the abuse he suffered.

“I am also a middle school teacher,” she said. “But I’ve never seen or heard of such extreme bullying.”

The boy, surnamed Kwon, and his mother, whose family name is Yim, are being identified only by those names in the Korean press. Yim described her son as timid and naive. She said that although she asked her son about bruises on his arms, he always had innocent explanations.

The bullying was detailed in his suicide note and confirmed substantially by Daegu police began in March. Two of his classmates made him play an online role-playing game using their IDs to advance their characters’ standing in the game more quickly. The bullying turned physical, Daegu’s Suseong Police said, when the two bullies’ game accounts were hacked and their “virtual money” and game items passed on to other players. The abuse included water torture, dragging Kwon around by the neck and forcing him to eat crumbs from the floor, the police said.

The bullies reportedly went to Kwon’s house frequently after school and beat him with his elder brother’s martial arts equipment. When away from Kwon, they sent him text messages asking him for money and telling him to do their homework.

Kwon wrote in his suicide note that he “couldn’t ask for help from parents, teachers or police” because he was afraid of retaliation.

Kim Geon-chan, the secretary general of the School Violence Prevention Center, said that reaction was common, adding, “Eighty to 90 percent of victims of school violence don’t report it to parents or teachers because they are either afraid of revenge from the bullies or they don’t believe reporting it will help them.”

According to a Foundation for Preventing Youth Violence survey of 3,560 students last year, 57 percent of respondents said they would not ask for help. About 28 percent said their reason was fear that the incidents would snowball, followed by 19 percent who said reporting the abuse would be of no use. Thirteen percent of the respondents said they were afraid that the bullies would exact revenge.

“When victims of school violence call us for help, most are concerned with how they would be protected after reporting it,” said Choi Hee-young of the Foundation for Preventing Youth Violence. “Currently, schools have a team to deal with school violence, but they tend to call in victims and bullies together in one place to figure out the truth.”