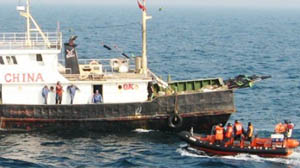 Officials announced a set of countermeasures against illegal fishing in the Yellow Sea, a problem caused predominantly by Chinese vessels. The announcement comes two weeks after the death of a Korean Coast Guard officer at the hands of the captain of a Chinese fishing ship.

The government will also increase by nine the number of 3,000-ton or larger Coast Guard patrol vessels to 27 and replace 18 older and slower patrol boats with new ones over the course of the next few years, the office said.

The government and the ruling Grand National Party yesterday agreed to earmark 932.4 billion won between 2012 and 2015 to implement the measures, including 108.4 billion won for next year. Seoul announced more modest countermeasures against illegal fishing in 2008 backed by only 4.58 billion won.

“The countermeasures in 2008 focused on improving lighter equipment to better deal with resistance by illegal fishermen,” said the Prime Minister’s Office in a statement yesterday. “But the countermeasures the government came up with this time will greatly reinforce the capacity to crack down on illegal fishing and are comprehensive, encompassing legal and diplomatic measures.”