Song Il-kook, 40, is not a typecast actor. He has played a variety of roles ranging from a king in the hit period drama series “Jumong” (2006-7) to a drug kingpin in “A Man Called God” (2010) to a cop in “Detectives in Trouble” (2011). He takes on an entirely different role in his most recent drama, “Fermentation Family” on JTBC, where he plays a mobster who begins working at a restaurant.

Song made his debut in 1998 and has starred in numerous dramas and movies. But some have criticized him as merely riding the coattails of his mother. His actress-congresswoman mother Kim Eul-dong was a fixture on dramas back in the 1990s and early 2000s. After Song starred in “Jumong,” however, he gained footing as an actor of his own right. He played the historically important figure Jumong, the founder of the ancient kingdom of Goguryeo (37 BC to AD 668) in the drama series and the drama series became the most watched drama of the year, with an average nationwide audience share of about 41 percent. For his role, Song won several awards and gained a fan base that extends overseas.

Since Song is known for playing tough roles, it’s surprising to see him peeling onions and chopping carrots in “Fermentation Family.”

Song’s character Ki Ho-tae is an orphan who grew up and became a member of a crime syndicate. But he starts a new life as a worker at Chunjiin, a Korean restaurant, where he discovers the perks of having an excellent palate.

Early reviews of “Fermentation Family” are highly positive. Although the cinematography is rich with scenes of scrumptious kimchi, more critics are praising the drama for its warmth and focus on its characters. The family that runs Chunjiin embodies this warmth, offering meals to those who need them most.

The JoongAng Ilbo met Song at the “Fermentation Family” drama location in Wanju, North Jeolla. He has been washing and preparing onions, scallions and cucumbers for his role as an assistant cook and his worn hands show it.

Song said in a recent interview that he enjoys the gig because he can gorge on Korean delicacies. Here are excerpts from the interview.


Q. How big was the influence of “Jumong” on your career and image as an actor? 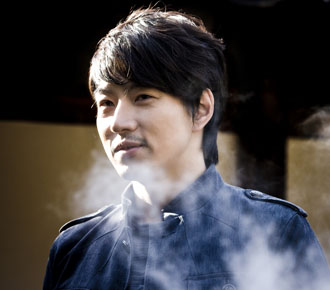 A. The image that “Jumong” created for me stuck and is still very strong. I recently visited Myanmar, where I was treated like royalty. I had not realized how popular the drama was until the day of the fan signing, when a huge crowd turned up. When I went to Iran, hundreds of fans gathered at the hotel terrace to greet me. Years have passed after “Jumong” but a majority of people still remember me from the drama. I feel lucky that I can play this role [which is very different from “Jumong.”]

Do you find this change awkward in any way?

I’ve come a long way since I played a king in “Jumong” five years ago. At first it was hard making the transition from such an imposing, powerful character to the complete opposite. I tried to look cool on a scene where I was peeling an onion in the beginning but now I feel comfortable with my character.

Your mother must have been busy with work when you were growing up. Were her meals special to you?

I loved curry but I ate it whenever I got a scolding from my mother. She always made it herself - it was her way of saying sorry. I thought about curry a lot when I was filming “Fermentation Family.” I understand Ho-tae because I too felt jealous when I went over to my friends’ houses and their mothers made us good food.