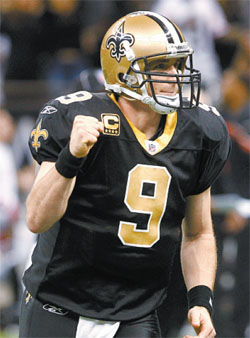 NEW ORLEANS - Saints quarterback Drew Brees set the NFL record for yards passing in a season, breaking a mark that Dan Marino had held for 27 years, as the Saints clinched the NFC South title with a 45-16 victory over the Atlanta Falcons on Monday.

Brees threw for 307 yards and four touchdowns, the last a nine-yard strike to Darren Sproles that set the record with 2:51 to go.

It was Brees’ final pass of the game and it gave him 5,087 yards passing - with one game still to play. Marino finished with 5,084 yards for the Miami Dolphins in 1984.

As Sproles spiked the ball, Brees put his arm over his head and started walking toward midfield while the Superdome crowd went wild and his teammates chased him down.

The Saints also had 463 total yards, giving them more than 6,857 offensive yards for the season, breaking the 2008 club record. New Orleans continues to close in on the NFL-record of 7,075 offensive yards in a season set by the 2000 St. Louis Rams.

New Orleans entered the game needing only one victory to clinch the NFC South title, while Atlanta could have remained in the hunt to defend its 2010 division crown with a win.

The Saints responded immediately, with Brees hitting Lance Moore for a 38-yard gain on New Orleans’ first play from scrimmage.

The Saints then went to the running game, with Chris Ivory rushing one time for 11 yards and Pierre Thomas three times for 24 yards, including a 4-yard touchdown run to make it 7-3 to the hosts.

After scoring, Thomas pulled a bow from his pants, stuck it on the football and offered it as a gift to a woman in the stands.