According to the Chinese zodiac, those born in the Year of the Dragon are often associated with wealth and power, and this would certainly be the case for most Korean CEOs.

A report by the Korea CXO Research Institute shows that of 1,200 chief executives at 1,000 listed firms, some 100, or 8 percent, were born in a dragon year - meaning that 2012 could be their year to shine.

Of the names on the list, Hanwha Group Chairman Kim Seung-youn is the only CEO born in a dragon year - in his case, 1952 - to be working at one of Korea’s top 30 business conglomerates. And market observers are keeping a close eye on how Kim attempts to foster Hanwha’s solar energy business as a new growth engine next year. 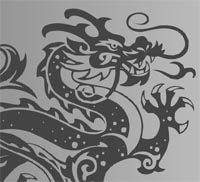 Owner-managers refer to CEOs who both own the company and run it, and are often seen in Korea’s family-controlled business conglomerates. They are different from professional managers who do not own a stake in the company.

Another report by Chaebul.com, a web portal on Korean conglomerates, also noted on Monday how many of the dragon-year executives got promoted in this month’s annual managerial musical chairs. It said that industry figures will be keeping close tabs on their management style and skills in 2012.

“Kwon has contributed to strengthening Samsung’s market leadership in memory products, and has also led the expansion of the non-memory products business,” Samsung Group said in a statement upon announcing its reshuffle this month. Kwon is in charge of Samsung’s parts and components business.

Those born in dragon years are generally ambitious, bold and have a strong sense of pride, according to experts. There is also a traditional belief that they have more good luck than the other 11 animal signs, which helps explain why births tend to shoot up at least 5 percent in dragon years in China.

In 2002, Forbes magazine said that 11 percent of the richest businessmen in U.S. were born in the year of the dragon.

The Chaebul.com data also examined which dragon CEOs owned the most lucrative stocks and found that, as of Monday, 17 had stocks worth over 100 billion won ($87 million).

Lock&Lock CEO Kim Joon-il was No.1 with 1.14 trillion won in stock-based assets.

Sixty-year cycle of the Chinese zodiac

Further complicating matters are the five elements, one for each 12-year cycle. As 2012 is in the water cycle, next year’s so-called ‘black’ dragon babies are expected to be in for especially good fortune.

Korea and Japan also observe a 12-or 60-year cycle, which serves as a huge marketing tool for the retail industry at the onset of every year.

Some couples try to give birth on certain years - or auspicious dates - depending on its characteristics, with the years of the pig (wealth) and dragon (power) being especially popular.