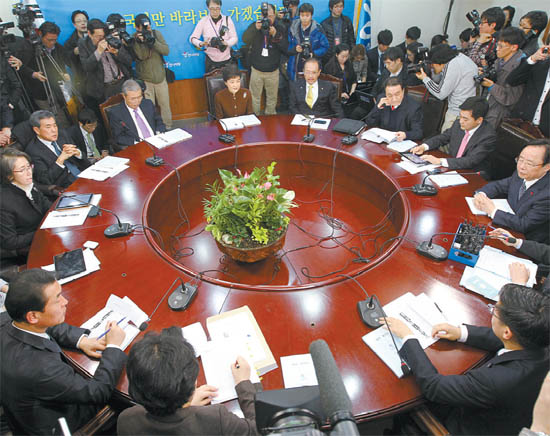 
The Grand National Party’s emergency leadership under Park Geun-hye yesterday took a first step to salvage the sinking ruling party by offering to surrender its lawmakers’ immunity from arrest and prosecution.

Representative Park, the interim head of the GNP, also disclosed yesterday morning her emergency leadership council, which includes six reformists from outside the party, and asked for senior party members’ endorsement. The Standing National Committee of the party immediately approved the 11-member council.

Representative Hwang Young-cheul, the newly named spokesman of the GNP, said the emergency council decided to create an in-house committee to monitor the prosecution’s investigation into the recent cyberattack on the National Election Commission, a major source of public distrust of the party because an aide to one of its lawmakers was accused as the culprit.

Although the police concluded that the chauffeur of GNP lawmaker Choi Ku-sik was solely responsible for the attack, which paralyzed the Web site of the election watchdog, suspicions are high that someone higher up in the party and at the Blue House were behind the crime.

The cyberattack prevented voters from locating their polling stations during a mayoral by-election in October. Observers said a lower voter turnout would be advantageous to the GNP candidate and disadvantageous to the eventual winner, liberal independent Park Won-soon. The case is now being investigated by the prosecution.

“We want the prosecution to investigate the case thoroughly to satisfy the public by answering all suspicions,” Hwang said. “The GNP will cooperate to make sure that the prosecution’s probe will proceed properly.”

The emergency council also decided to ask Representative Choi to leave the party.

At the meeting, the leadership also agreed to have all GNP lawmakers give up their immunity from arrest and prosecution during a National Assembly session. The plan will be voted on at a lawmakers’ caucus to be adopted as an official party platform.

The measure to surrender immunity is intended to allow the prosecution to thoroughly investigate scandals involving GNP members. “There is no need to revise the law,” said spokesman Hwang. “We just have to decide that we will voluntarily surrender the rights.”

Hwang said the emergency council will meet weekly, while smaller discussions will be held along with field trips to gather public opinion.

After the painful defeat in the Seoul mayoral by-election in October, the entire GNP leadership stepped down to help reverse the party’s plummeting popularity ahead of the next year’s general and presidential elections. After intense debates on how to salvage the party, the Grand Nationals revised the party’s constitution to allow Park, a presidential contender, to become their interim leader and to carry out an overhaul. She was also given the power to name the members of the emergency leadership.

The emergency council was filled with reformists from a wide range of fields representing a broad spectrum of age groups. The lineup of the interim leadership, which includes a 71-year-old former economic official and a 26-year-old businessman, was seen as an important indicator of the direction of Park’s reforms ahead of next year’s elections.

Before the Standing National Committee meeting yesterday to approve the leadership, Park introduced the new members individually. “It is time for us to act on our thoughts on how the party will win back the public’s trust,” she said.

Kim Chong-in is a former four-time lawmaker armed with a strong economic background. From 1990-92, he served as the senior economic affairs aide in the Roh Tae-woo Blue House and introduced “public concept of land ownership” through which conglomerates’ ownership of real estate properties was limited.

After ending his fourth term as a Democratic Party lawmaker in 2008, Kim was named professor emeritus at the Hankuk University of Foreign Studies. He is also one of the mentors of Ahn Cheol-soo, the software mogul-turned-liberal political phenomenon.

He has also been a long-time adviser to Park, as he served as an economic official in the government of Park Chung Hee, her late father, who ruled the country from 1961-79.

“When he met with Park recently, he advised her to prepare for an alliance with Ahn,” a party official told the JoongAng Ilbo Monday. “He will likely speak strongly on efforts to reform conglomerates.”

“Without creative destruction, the GNP won’t be able to survive,” the official said.

The youngest member of the council is Lee Jun-seok, CEO of Classe Studio. The 26-year-old businessman started an educational volunteer group in 2007 as he graduated from Harvard University. The program offered high-quality tutoring to children from lower-income families in person and over the Internet. With a group of people who worked with him in the volunteer group, Lee launched the education IT company this year.

Professor Cho Dong-sung is a scholar who has participated in various fields. He is head of the Ahn Jung-geun Memorial, dedicated to the Korean patriot who assassinated Japanese colonial leader Ito Hirobumi in 1909, and once served as a director of the Hope Institute, a social service program of the liberal Seoul Mayor Park Won-soon. His vision of “design management,” which introduced the concepts of design to business administration and industrial engineering, is highly respected in Korean academia.

Professor Lee Sang-don is a well-known critic of conservative views but he has been a strong critic of the Lee Myung-bak administration. He was a co-leader of public law suits to stop Lee’s signature four-rivers restoration project.

According to Park Geun-hye’s aides, she recommended the professor’s columns to her aides.

Cho Hyun-jung, chairman of BIT Computer, is a first-generation start-up businessman who has not been close to politics. He told local media that he decided to join the emergency council although he is not a GNP member and despite his deeper ties to liberals.

Professor Lee Yang-hee is a renowned child rights advocate. She served as chairwoman of the United Nations Committee on the Rights of the Child for two terms from 2007-11.

Park’s choices of four lawmakers for the emergency council also indicated her intention for an overhaul. Representative Kim Se-yeon, 39, is the youngest lawmaker of the party, who has led self-reform efforts within the party. He is secretary general of the Minbon 21, the first-term reformist group of the GNP. Representative Joo Kwang-deok is also a member of Minbon 21.

Representative Hwang Young-cheul, the new GNP spokesman, was the only GNP lawmaker to vote against the ratification of the Korea-U.S. free trade agreement this month.